Retail workers in Poland to protest over poor conditions 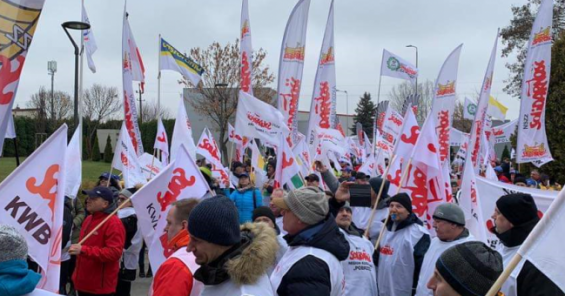 Commerce unions and workers in Poland will take to the streets on 4 November to demand better trade union representation, decent pay, work-free Sundays and measures to address chronic understaffing and high workloads.

The protest, which will take place in the capital Warsaw, is being organized by UNI Global Union affiliate Solidarnosc.

There are more than 2.2 million retail workers in Poland, making the sector the second biggest employer in the country. With this massive workforce, the Polish commerce sector ranks seventh in terms of employment in Europe. Many major retailers including Amazon, Auchan, Carrefour, Castorama, H&M, Jysk, Lidl and Metro operate in the country.

However, while retail workers in Poland make up 14 per cent of the workforce, only 3 per cent are covered by a collective agreement. Low levels of collective representation and bargaining in the commerce sector have led to poor wages and conditions, including inadequate occupational health and safety measures.

There are many underlying reasons for a lack of sector-level collective bargaining in Poland, including  requirements imposed by legislation. Furthermore, there is inadequate protection against discrimination for being a trade union member. Solidarnosc affiliates  report serious violations of trade union rights in many companies, including:

Despite being on the frontline during the pandemic, making sure that people have access to food and basic needs, retail workers are being denied the rights and trade union representation that they deserve.

“We have commissioned an investigation into the violation of trade union rights by retailers in Poland and the preliminary findings are highly alarming,” said Mathias Bolton, Head of UNI Commerce, “While fully supporting Solidarnosc in its just fight, we will engage with the companies – especially with the ones with which we have a global agreements – to make sure that all obstacles to union organizing and collective bargaining are removed and commerce workers in Poland are free to enjoy trade union rights.”