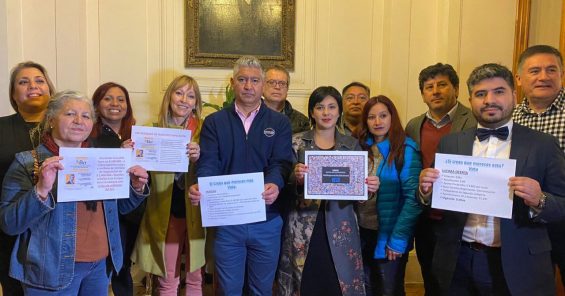 The National Federation of Pharmacy Workers (FENATRAFAR), affiliated to CONATRACOPS in Chile, reached an important agreement with Salcobrand, one of the largest business groups in the country, by winning a collective bargaining agreement on October 8th.

With this agreement, the union won a wage increase for all pharmacy workers and negotiated a bonus of one million pesos to each worker in the company as a closure bonus. “We are grateful for the tremendous support we had in our collective bargaining process, where the dignity and rights of workers were vindicated,” said Georgina Carrasco, Director of FENATRAFAR.

The Federation also negotiated the readjustment of transportation allowance, the return of the use of white smocks and the willingness of both parties to continue conversations to achieve other improvements, among other benefits.

“The 73% of women who make up this union deserved this victory and are thankful for the support we received from UNI Global Union. We are proud,” Carrasco concluded.

The agreement came on the heels of a strike and after the company threw gas at workers during a peaceful demonstration on  October 6th. UNI Américas publicly denounced the incident, and the Ministry of Labour will launch an investigation to determine responsibilities.

Congratulations to all the workers who have been the protagonists of this campaign and negotiations, determined to fight for decent work and fair working conditions.