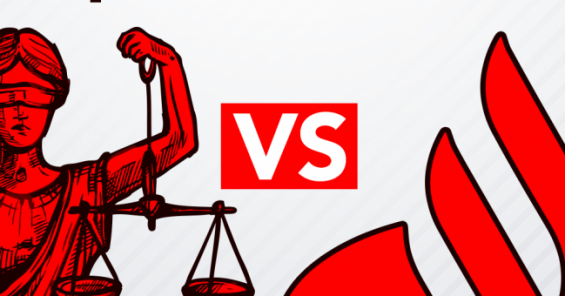 UNI Global Union condemns Santander Brazil for enforcing a 55 per cent pay cut on 40 bank union leaders and workers after they made a legal challenge to be paid for overtime hours.

Brazil contributes to the biggest slice of profits for Spanish multinational Santander, but instead of paying these workers what they were due, the Brazilian arm of the bank demoted them and hacked their pay by more than half.

“Wages are food, for subsistence, and not reducing wages is a principle of labour law already enshrined in Brazilian legislation. By cutting salaries by more than half, undermining freedom of association and the right of workers to claim their dues in court, Santander is attacking fundamental human rights, and taking a real step backwards,” said Ivone Silva, president of the Sindicato dos Bancários de São Paulo, Osasco e Região.

Facing the arbitrary and inhumane cut in their salaries by Santander, the bank workers again went to court and were able to secure a judgement that restored their pay grade and salaries. However, Santander Brazil has failed to comply with the order despite incurring daily fines due to non-compliance.

“By not complying with the court order, Santander is not only showing abuse of its position as an employer and an economic power, but also attacking the Brazilian judiciary. We are sure that Santander would not have the same attitude towards the Spanish judiciary,” said Rita Berlofa, President of UNI Finance.

“There seems to be no limit in how low Santander is prepared to go in disrespecting its workers and the law in Brazil. Santander Brazil is brazenly breaking international labour standards in a country where it is very successful. We call on Santander global management in Spain to intervene and put an end to the exploitation in Brazil.”