SINTRASASS wins 2022 Breaking Through Award for care organizing in Colombia 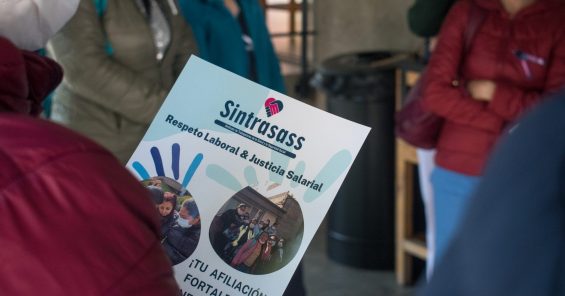 Despite organizing in one of the most hostile environments in the world, Colombian union SINTRASASS (Sindicato de Trabajadores de la Salud y la Seguridad Social) is rapidly growing—from a small enterprise union to one representing workers nationwide—and is taking on one of the biggest care companies in the world: German care giant Fresenius.

To honour the union’s organizing successes, UNI Global Union is giving SINTRASASS a 2022 Breaking Through Award.

“We have been developing and growing our union, steadily,” said Anderson Peralta, President of SINTRASASS, “It is a source of pride to receive this recognition for our hard work.”

The union has pushed through one collective agreement at a Fresenius subsidiary Quironsalud, and in the past few weeks, it has demanded collective bargaining at several more.

The union’s growth is impressive given the opposition it has faced. Union leaders in Medellin and Cali, both working for Fresenius owned clinics, have received death threats. In response, the global labour movement has stood in solidarity with these workers through an international campaign, backed by UNI, IndustriALL and PSI.

Not bowed by threats, the pandemic did not stop SINTRASASS either. The union rolled out innovative digital strategies to bring workers together during a period of social isolation.

“Organizing is never easy, but when workers face death threats and a deadly virus, it is even harder,” said Marcio Monzane, Regional Secretary of UNI Americas. “SINTRASASS’ determination and innovation are inspiring to us all. They have started to change the Colombian care sector, and they are demanding that Fresenius change globally as well.”

The award is given annually to recognize unions’ outstanding organizing achievements. Other winners this year include SITT in Romania and SPPD in Indonesia.