“Sisters, we need to stand together!”: The legacy of UNI Global Union President, Ann Selin 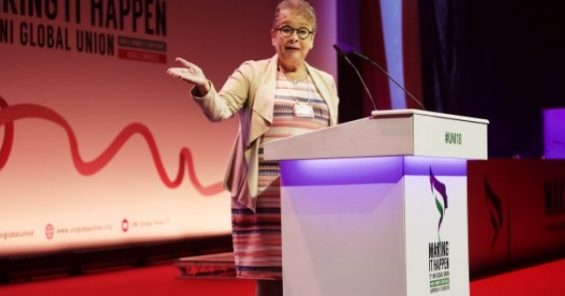 Coming from a working-class family and with trade unionism running in her blood, Ann had her first job at the age of fifteen, was first elected as a trade union representative at nineteen and worked her way up until she headed PAM – the biggest trade union in Finland – for fifteen years.

Stressing that women need to support each other, Ann placed particular emphasis on the importance of UNI’s mentoring programme for women, launched in 2013, as an effective way of organising more women and growing a new generation that can influence the future of unions in the services sector.

Ann also highlighted the importance of being in Liverpool, the legacy of its trade union movement, and how trade union women work together to break down divisive barriers created by the inequalities that riddle our world.

The Women’s Conference is also of personal importance to Ann, as she announced that she will be stepping down from the UNI Global Union Presidency.

Ann stated “it has been a privilege to serve my members, and society as a whole. It is no coincidence, that we are here today. Each of us has a story to tell and each of us has battled fights no man will ever know. We can, and we should be proud of all the things we have accomplished.”