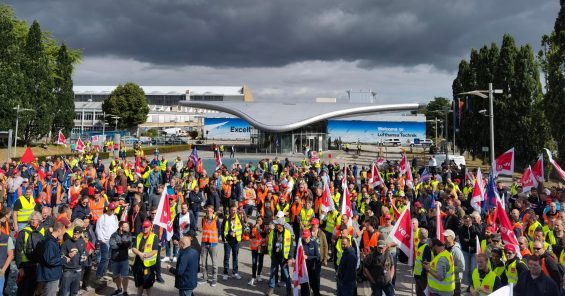 As inflation continues to increase, UNI Global Union with airport cleaners and security officers it represent, stand in solidarity with ver.di and the ground workers from Germany’s flagship carrier Lufthansa going on a warning strike this Wednesday to improve staffing ratios and pay.

“Without airport workers on the ground, airplanes don’t fly,” said Oliver Roethig, Regional Secretary of UNI Europa. “Their demands for increased pay to compensate for the rising cost of living shouldn’t be dismissed by a company that is taking in healthy profits. Together with our sister federation the ITF, UNI Global Union is standing shoulder to shoulder with all airport workers fighting for their families in Germany and across the world.”

The deputy chairwoman of ver.di Christine Behle, who is also the lead negotiator, asked travelers for their understanding and pointed out that workers are facing huge staff shortages, high inflation and a three-year wage cut that is putting them under increasing pressure. “They urgently need more money, and they need relief – for themselves and for the passengers. The employer’s offer is not enough for this,” Behle said.

The workers are calling for a 9.5% raise in wages to compensate for inflation and increased apprenticeship pay by €180, among other improvements.