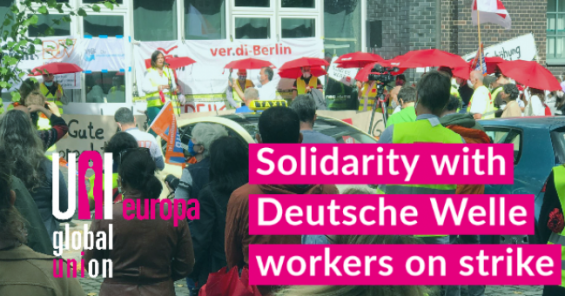 UNI Europa and its media, entertainment & arts sector representing over 60 unions and 200,000 media & entertainment workers across Europe, stand in solidarity with colleagues on strike at the German broadcaster, Deutsche Welle in Berlin. UNI Europa supports their call for good faith at the bargaining table to secure fair pay and decent working conditions.

Yesterday, 500 employees of Deutsche Welle in Berlin responded to the call for strike action of the German trade union ver.di including 200 colleagues who work in their home office for health protection reasons as part of COVID-19 measures. As a result of the strike action, part or the programming had to be either cancelled or replaced by shelf programmes: no pay, no news!

The warning strike that will continue today has been called amid the withdrawal by management of already agreed pay increases for 1,700 employees and 4,000 freelancers. The broadcaster withdrew the accord to increase pay by 6.2 per cent within a 33-month period, and now offers only one per cent per year for three years.

“This is an attempt by management to uncouple the pay and conditions of employees, freelancers as well as trainees and volunteers from development of collective agreements in public broadcasting and the civil service. Deutsche Welle’s bad faith at the negotiating table provoked this first warning strike during the collective bargaining negotiations,” explained ver.di negotiator Kathlen Eggerling. “The broadcaster is well financed and can afford a good collective agreement that takes into account the performance of the employees, especially during the pandemic”, Eggerling underlined.

UNI Europa and the entire community of media and entertainment workers affiliated to UNI express their solidarity with colleagues at Deutsche Welle and stand with ver.di and the union’s demands in this difficult collective bargaining negotiations.

UNI Europa Regional Secretary Oliver Roethig said: “Good work and the commitment of colleagues to uphold quality programming during these difficult circumstances merit not only fair pay but also good faith at the bargaining table. We support the strike action of our colleagues at Deutsche Welle and join ver.di in its demand for decent work and fair pay. During the German EU Presidency, Deutsche Welle, a public broadcaster, gives a bad example. The endeavour of the Merkel Government must be to strengthen collective bargaining in Europe, not undermine it. The German Presidency of the European Council has voiced commitment to collective bargaining and we are optimistic in working together to strengthen it across the EU. Right now, it is important that this same government show what that commitment means to workers in Germany.”

William Maunier, General Secretary of the French media union SNRT-CGT and President of the media, entertainment & arts sector of UNI Europa said: “All broadcasting unions in Europe stand with colleagues at Deutsche Welle. We call on the entire management to respect all workers and their right to strike. The lack of good faith is bad enough, but insulting workers who make use of their fundamental and democratic right to strike calling the action ‘insensitive’ is simply wrong. We call on management to return to the bargaining table with a fair offer and the intention to stand by agreements made.”