Spanish bank trade unions save over 1000 jobs at BBVA 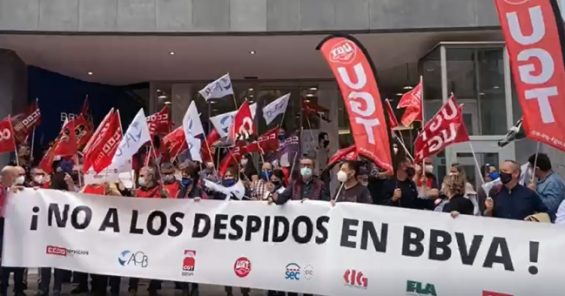 After months of intense worker actions and a successful national strike, the Spanish finance unions  —including UNI´s affiliates UGT and CCOO— signed a reduction in force agreement with the BBVA, one of Spain’s largest multinationals, that saves over a 1,000 jobs in a sector that has been hit hard by the pandemic.

The employment regulation plan (ERE in Spanish) has been reduced by 1,073 people. BBVA’s initial proposal placed the number of dismissals at 3,798. The unions and the company agreed to 2,935 layoffs without forced departures. The agreement has been subscribed by 72.7% of the union representatives.

In a statement, CCOO celebrated that the final agreement saves jobs. The union is confident that the different exit conditions that have been agreed upon will prevent any forced layoffs from taking place in the context of these job cuts.

“The mobilizations, work stoppages and the strike, which have been massively followed by the BBVA staff, have been the key driving force to break the deadlock in the negotiations and to get the Bank to end up yielding to a very tough negotiating position,” the union points out in its statement.

For its part, UGT has defended the agreement, pointing out that “if the latest proposal, which includes an important part of what was requested  “is not accepted, “we would return to the starting point of 3,798 terminations and the compensation that the company already anticipated for this scenario: 20 days per year worked and a maximum of 12 months”. Like CCOO, UGT also believes that all voluntary redundancies will be respected. “It is not a matter of pride to sign an ERE, and it should not be a matter of pride not to do it—it is a matter of responsibility.”