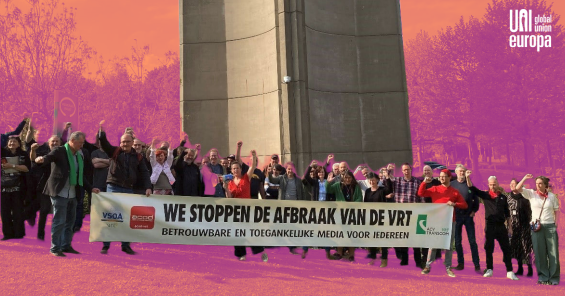 In a strong show of unity hundreds of union members and supporters joined the three unions, ACOD, ACV-Transcom and VSOA representing workers at Flemish public broadcaster VRT in a one-day strike over plans on 31 May to defund the broadcaster and its impact on quality of programming,  jobs,  working conditions, and the financial sustainability.

The Flemish government announced to reduce the budget from €275 million to €258 million in 2025. Further, the government will not index the operating costs, which will result in a structural deficit that will grow each year. The cuts come at a time when VRT needs to invest in digitalization and faces increased costs due to high inflation.

The response of VRT management is a sell-out, say unions. Instead of engaging in a dialogue with the government over a sustainable financing plan for VRT and to invest in its workers and the digital transformation of the broadcaster, it has decided to cut over 200 jobs, to privatize core services including one of its most successful shows, “thuis”.

At the gate of VRT, where the striking workers and their supporters from other sectors, civil society and political parties gathered, the message was loud and clear: strong public service broadcasting means quality programming and independent information, which democratic societies draw their strength from. Reinvestment in VRT not its demolition is the way forward.

Wies Descheemaeker, General Secretary of ACOD-VRT said: “A Strong VRT is based on the strength of its own staff – many of whom are present at this picket. The management’s  so-called transformation plan does not. Management underestimates what we, the makers of public broadcasting, can and want to achieve. If the VRT has kept running and, through the years of austerity, through the pandemic, is still considered one of the most efficient and creative broadcasters in Europe it is because of all those working on the shop floor – despite the wrong policy choices.”

ACV-Transcom’s Carlos Van Hoeymissen underlined : “The VRT needs investments instead of privatisation. This means that more money is needed for future-oriented digitalisation, more money for production means and more money for VRT employees. As a public broadcaster we need to keep talent and experience in-house.”

Lut Gouwy of VSOA asked : “When is it enough? For the government and the current management never.  For the VRT staff, for us, it is about time to stop the vicious cycles of transformation plans. Because with every new plan, it is the workers who bear the brunt. More than 600 jobs have been cut by the successive plan while all departments have been overwhelmed with work and the pressure that goes with it”.

UNI affiliates expressed their solidarity and support for the union’s demand and issued a statement calling on the Flemish government to recommit to the value of public service broadcasting as a service of and for citizens. The VRT needs a future proof budget that takes into account indexation, the need to invest in the digital transformation including proper and structural training and long-life learning opportunities for the workforce.