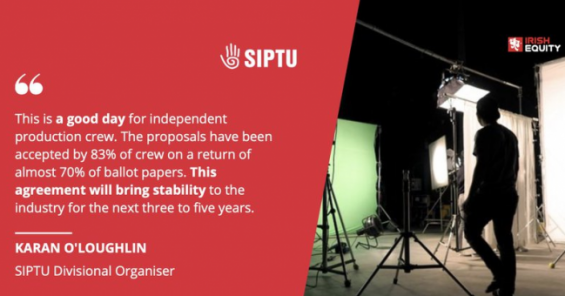 SIPTU has successfully concluded the negotiations of a new, ground-breaking collective agreement for live action film and television crew.  The negotiations took over two years and are a break through for crew members in Ireland.

Last week, the results of the ballot of union members confirmed strong support for the agreement reached. The proposals have been accepted by 83% of crew on a return of almost 70% of ballot papers. This level of support gives the agreement a very solid foundation for workers in the industry. The proposals have also been accepted by producers and the union will now move quickly to set up a joint monitoring group which will oversee the implementation of the agreement and its practical operation on the ground.

SIPTU Divisional Organiser and UNI MEI Vice President, Karan O Loughlin, said: “This new agreement will come into operation in January 2021 and covers all grades except film construction which is subject to separate negotiations. Great credit is due to the film crew members who, as part of their SIPTU committee, worked tirelessly over the last two years to ensure we could get an agreement that is modernised and fit for purpose. This agreement deals with all aspects of day to day work for crew, enables producers to compete for work internationally, provides a pay structure that will bring stability to the industry for the next three to five years and will greatly assist with the regulation of working hours.”

The agreement provides pay stability for the next years and an industry pension for crew for the first time. The agreement also includes a commitment to developing the first work-life balance policy for the film and television industry that will provide better controls on working hours.