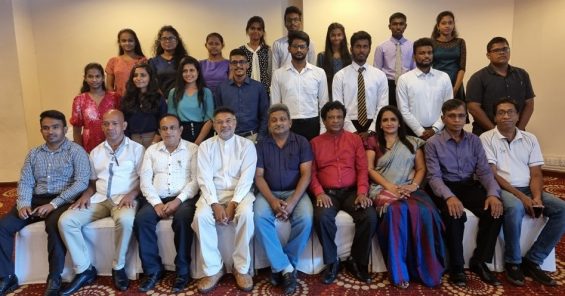 A modest reception was held on 4 May 2022, where sixteen UNI APRO-JPGU Kanto Scholarship program recipients received the first disbursement of their well-earned awards. The event was witnessed by officials from the three postal UNI affiliates – the National Post and Telecommunication Workers Union (NPTWU), Sri Lanka Post & Telecom Services Union (SLPTSU) and the Union of Post and Telecommunication Officers (UPTO).

According to Jayasri Priyalal, Chairperson of the scholarship board, the recipients took an online selection test due to pandemic restrictions, unlike earlier occasions where applicants undertake a comprehensive assessment in person. He was also happy to note that most scholarship recipients, particularly female students, are using the award to support their degree studies in the Science, Technology, Engineering, and Math (STEM) fields in various universities.

Champika Atimoratenna, Secretary of the scholarship board and General Secretary of UPTO thanked the JPGU Kanto union leaders and members for their generous financial help in supporting the educational needs of postal unions’ members. He also thanked UNI APRO for coordinating the scheme through the scholarship board, especially when Sri Lanka is presently experiencing a severe economic crisis.

The program started in 2002 as a humble Union Social Responsibility (USR) project between the UNI Asia and Pacific Regional Organization (UNI APRO) and the Japan Post Group Union’s Kanto branch to help the children of postal employees in Sri Lanka to achieve their scholastic ambitions. The unique program started with ten students and steadily increased to supporting sixteen students in this tenth iteration. The scholarships are awarded based on the students’ academic progress.

UNI APRO Regional Secretary Rajendra Acharya congratulated the students and extended his appreciation for JPGU Kanto’s continuous support for the program. He said, “I congratulate all the scholarship program recipients and am happy that more students could benefit in this round. I also thank the JPGU Kanto for their firm commitment to the program, which is ever more important now in Sri Lanka’s time of need.”