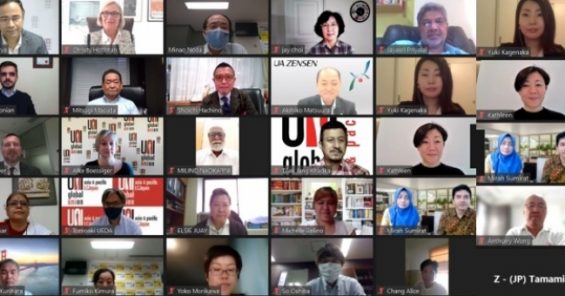 UNI Apro President Minao Noda led the meeting to observe a minute of silence to commemorate the victims of Covid-19 and veteran union leaders who passed away in recent times.

Opening remarks from President Noda and UNI GS Christy both noted the recent developments relating to the pandemic in the Asia and Pacific region as well as the shocking military coup in Myanmar meant the outlook for the remainder of 2021 remains uncertain. Nonetheless, UNI Global and UNI Apro remains committed to upholding the labour rights of workers and advocating for the improvement to peoples’ access to the Covid-19 vaccines.

The members were updated on matters of affiliation where four applications will be recommended for approval at the next UNI World Executive Board. They also endorsed efforts to discuss and explore available options regarding the status of the UNI Congress given that it would be held in the Apro region and hosted in Brisbane, Australia, in 2022.

UNI Apro Regional Secretary Rajendra Acharya updated the meeting on the status of the sector conferences that will be held in the upcoming five months. The overall theme will be “Building Forward: Towards an Inclusive, Equitable and Sustainable Future”. A joint background paper prepared based on the theme, highlights the common issues of concern including digital transition and organising of unions, prioritising occupational safety and health and the promotion of a smart partnership industrial relations, will foreground the discussions at the conferences.

The Management Committee accepted two statements and agree to table them at the upcoming UNI Apro Executive Committee meeting. One relates to UNI Apro’s commitment to support all efforts to reinstate democracy in Myanmar and the second statement addresses the issue of “Anti-Asian Hate” which recognises that an increase in racist and xenophobic rhetoric during the pandemic had exacerbated racist attacks on members of Asian and ethnic minorities groups.

The next UNI Apro Management Committee would be held in the fourth quarter of 2021.