“The Amazon system is, by design, chewing workers in and spitting them out” 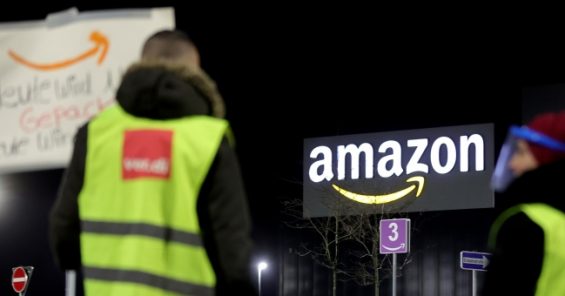 “On Prime Day, the UNI Amazon Global Union Alliance is recommitted to keep fighting against Jeff Bezos’ dystopian vision of a warehouse where workers are subjected to conditions so grueling that force them to quit.

Trade unionists have been saying it all along. With its unrealistic and body-breaking productivity goals, and intrusive employee surveillance, Amazon treats workers as disposable items. Now we know that Amazon’s staggeringly high worker turnover is not a flaw of the system—it’s the system.

The richest man in the world has built a corporate empire on the backs of workers he thinks “are inherently lazy.” The Amazon system is, by design, chewing workers in and spitting them out at a pace unparalleled in modern history.

Against this vision where workers are seen as disposable, the UNI Amazon Global Union Alliance is united with Amazon workers around the world, across facilities and borders, and throughout the supply chain to build democratic worker power through unions to promote a workplace where every worker is respected and treated with dignity.”

Representing more than 20 million workers in 150 countries—including 7 million workers in Europe—UNI Global Union and UNI Europa are driven by the responsibility to ensure skills and service jobs are decent jobs and that workers’ rights are protected, including the right of union representation and collective bargaining.Coordinated by UNI Global Union, the alliance is comprised of unions from 22 countries including ver.di, the GMB, CCOO, CGIL, the RWDSU, and the Teamsters.