“The people of Myanmar will not be silenced:” UNI joins global union movement in making noise for democracy 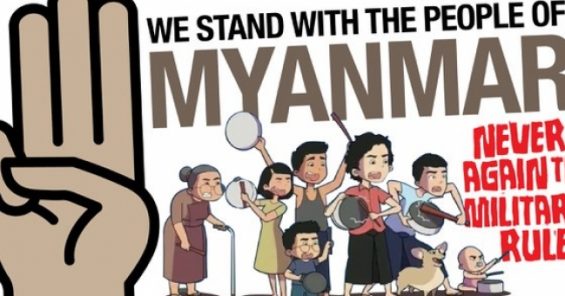 As the military junta in Myanmar resorts to increasingly violent tactics against pro-democracy demonstrators, UNI is joining the global trade union movement in a noise barrage today to demand the return to democratic rule there.

Union activists worldwide are showing solidarity by making noise outside of Myanmar consulates and embassies as well as union offices and online. These acts of solidarity mirror the nightly noisy protests in Yangon.

“The people of Myanmar will not be silenced, and they are standing steadfast in their demands for democracy in the face of batons, bullets, and fire hoses,” said Christy Hoffman, General Secretary of UNI Global Union. “Today, unions around the world are carrying their voices to every corner of the globe.    We are calling upon our countries and companies to cut off economic support for this illegitimate and illegal military regime.  And today especially we ask the mobile operators and internet providers to disregard the outrageous and disproportionate directive from the military  that the internet must be shut down.”

“Democratic values are trade union values, and union members in Myanmar are on the frontlines pushing for an end to the junta,” said Rajendra Acharya, Regional Secretary of UNI APRO. “We are united with them in solidarity, and we share their resolve in pushing for a return to democracy, a release of detained protestors, and the free flow of information.”

On Tuesday, several global unions released a statement aimed at ramping up pressure on corporations and other governments to stand up for Myanmar. Follow today’s action on social media at: #Workers4Myanmar.