They will not silence us! UNI Americas, Brazilian care unions honour the victims of the pandemic and demand a competent government response 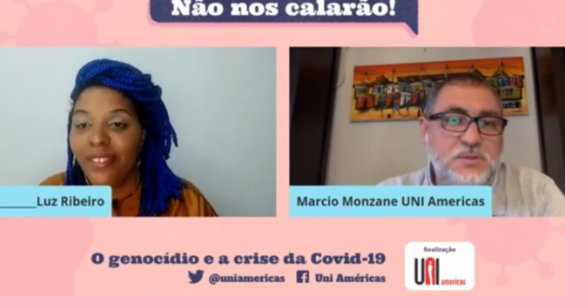 On November 24, UNI Americas organized a massive online demonstration in resistance to the Brazilian government’s incompetent, failed response to the Covid-19 crisis. As a second wave of the virus crests, participants said, action in the South American is urgently needed.

The event, titled “They will not silence us! Genocide and the Covid-19 crisis,” brought together the Brazilian Healthcare Union Network UNISaúde—a coalition of 40 unions representing more than one million care workers—and allies from indigenous, quilombo, and human rights organizations.

The protestors honoured the victims of Covid-19 in Brazil by demanding immediate change to the disastrous planning of President Jair Bolsonaro’s government to fight the virus. Brazil is nearing 200,000 Covid deaths, the second worst in the world, and the number of infected is close to six million, the third largest outbreak.

There were 370,000 confirmed cases of the disease among care professionals, according to the latest Epidemiological Bulletin of the Ministry of Health and almost 400 deaths. However, these numbers are low due to problems in the system that compiles the data.

“At the beginning of the pandemic, health professionals were elevated to the rank of heroes, and what we have seen afterwards was total neglect, such as unemployment, precarious working conditions, including the lack of PPE (Personal Protective Equipment), and exploitation. Due to the crisis, some even accepted bad employment contracts so they wouldn’t lose their jobs,” said Márcio Monzane, Regional Secretary of UNI Americas.

Indigenous and quilombo communities have also suffered disproportionally. Monzane stated the decrees of President Jair Bolsonaro have penalized these hard-hit populations, by preventing supplies of drinking water and medical assistance, and Bolsonaro’s response has directly contributed to many deaths.

“The president’s response to Covid has been criminal. From the beginning, he minimized the health crisis, calling Covid-19 ‘the flu’ and gave bad examples by promoting agglomerations. What he did against health professionals, and especially these ethnic groups, was genocide,” he Monzane said.

Last July, the Brazilian Healthcare Union Network UNISaúde organized a complaint signed by 63 entities, presented at the International Criminal Court in The Hague, Holland, accusing Bolsonaro of genocide and crime against humanity. The complaint was suspended by the court, but it is still possible to appeal.