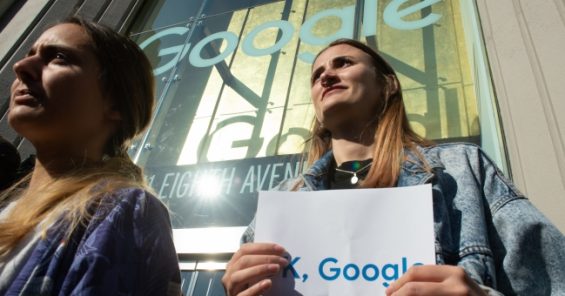 After years of organizing, Google workers in the United States have formed a union.

The Alphabet Workers Union (AWU), named for Google’s parent company, was announced on 4 January, and it comes after repeated employee mobilizations—including a massive, global walkout protesting sexual harassment—that have forced some changes at the company. However, workers say there is more to be done.

Lucas Sanders, a software engineer at the company says, “The walkout demands have not been directly acknowledged, let alone implemented. We need to make sure we have the systems in place to ensure people aren’t being taken advantage of — and if Alphabet won’t create those systems, we will!”

Key demands are inclusive, fair conditions; accountability for discrimination, harassment, and abuse; freedom to decline projects they morally object to; and access to equal benefits regardless of employment status.  Roughly half of Google’s employees are contractors.

Since AWU, affiliated with CODE-CWA, surfaced publicly, it has grown exponentially. “Our first hundred took a year,” the group said in a Tweet. “We’ve just increased by three times that in two days. And this isn’t just signing up. It means paying dues, committing to meetings, a structure. There’s appetite for change at Alphabet. This is proof.”

In a New York Times op-ed, Parul Koul, a software engineer and executive chair of AWU, and Chewy Shaw, a site reliability engineer and the union’s vice chair, said the union’s goals are not limited to making the company a fairer place to work. They also aim to change how the company operates, to make sure it serves a public good.

“[Google] has a responsibility to its thousands of workers and billions of users to make the world a better place. As Alphabet workers, we can help build that world,” they wrote.

“The announcement of the Alphabet Workers Union is an inspiring start to 2021, and these workers will be an engine of change at Google, in the tech sector, and beyond,” said Christy Hoffman, General Secretary of UNI Global Union. “Tackling structural problems requires structural solutions like unions, and the 20 million members of UNI stand behind AWU as its members reclaim their power to make the company live up to its original motto: don’t be evil.”

One example of this international solidarity comes UNI affiliate Syndicom, who has been helping Google employees in Zurich organize. Miriam Berger, Syndicom’s National Secretary, said, “The call for more co-determination can be heard in Zurich as well as in Silicon Valley. Employees want democratization of their world of work, and they also want to help shaping it. This is possible when they unite and join forces. Congratulations!”