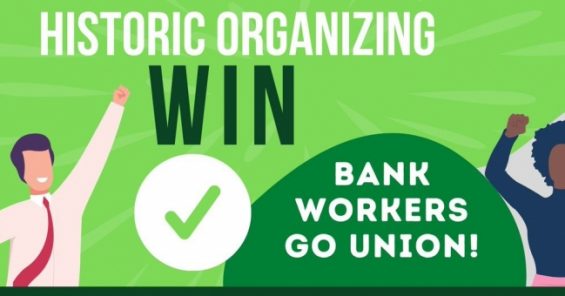 Members of UNI Global Union affiliate, the Communication Workers of America (CWA), are celebrating the first union contract in the banking sector for 40 years.

Workers at Beneficial State Bank across Washington, Oregon and California ratified a three-year deal that secures a fair minimum wage and increased benefits, expanded training opportunities, a joint labour-management committee, and a US$1,000 bonus.

“Prior to working at Beneficial State, when I was a call centre worker at Wells Fargo, I didn’t know it was possible for bank workers to form a union, let alone negotiate a contract with management. At Wells Fargo, I was constantly under extreme sales pressure and knew that if I spoke up, I would be putting my job at risk,” said Desiree Jackson, an Assistant Vice President at Beneficial State’s Oakland, California branch. “Now, not only do I have a voice on the job, but I have an actual say when it comes to pay and metrics and ensuring we’re providing the best financial services possible for customers.”

The new contract comes after Beneficial State Bank employees voted to form a union and affiliate to CWA in March 2020 following an organizing drive spearheaded by the CWA’s Committee for Better Banks (CBB). This prompted the bank to remain neutral during organizing and recognize the union after a majority signed union cards.

Frontline workers with CBB have been working to improve conditions in the U.S. banking industry, which is notorious for its systemic discrimination, low-wages, extreme sales goals and whistleblower retaliation. Only 1.1% of workers are represented by unions.

“This is a key victory for CWA and its members. Its importance cannot be underestimated. Organizing into unions is the only way to fight the low wages, discrimination and sales pressure that blight the banking industry in the U.S. We’re glad that Beneficial State Bank has seen that enabling workers to organize in a free and fair environment leads to better working conditions, better customer advice and a more sustainable business.”