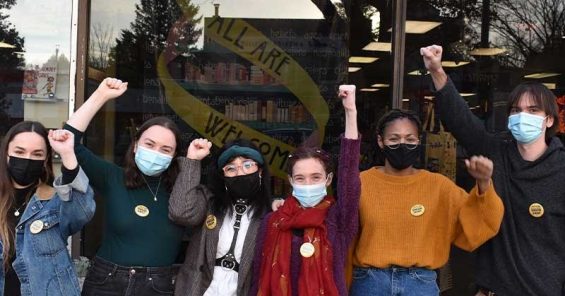 As the sales of printed books continue to rise in the United States during the pandemic, so too is the number of booksellers getting organized. In the past year, UNI Global Union’s U.S. affiliate, the UFCW, organized bookstore workers at stores across the country in what was a traditionally non-union sector.

Workers at Politics and Prose bookshops Throughout Washington, DC, made history as they joined UFCW Local 400, and P&P became the first-ever bookstore in the Capitol to unionize. Workers’ representatives are negotiating a collective agreement with the company to secure higher wages, a standardized pay scale and pay transparency.

Elsewhere, workers at Half Price Books locations in the Twin Cities, Minnesota, joined UFCW Locals 663 and 1189 in December 2021 and January this year after they won union recognition following National Labor Relations Board elections. Workers organized with UFCW to be able to bargain for liveable wages, better working conditions and a voice in their workplace.

“I am so excited to unionize because I know it will help us to be compensated appropriately for the work we do, to have a voice in policies affecting our ability to do our day-to-day jobs, and to protect the benefits we have earned!” said Hanna Anderson, who works at Half Price Books at St. Paul.

“The UFCW is breaking new ground and organizing bookstore workers in the United States. These wins are another example of frontline employees, working during a pandemic, demanding for their labour to be revalued. As printed book sales boom in countries around the world, bookstores represent a great opportunity for growing membership in the commerce sector and improving the wages and working conditions of the skilled and dedicated workers in the field.”