U.S. film and TV bosses have no time to lose as strike looms 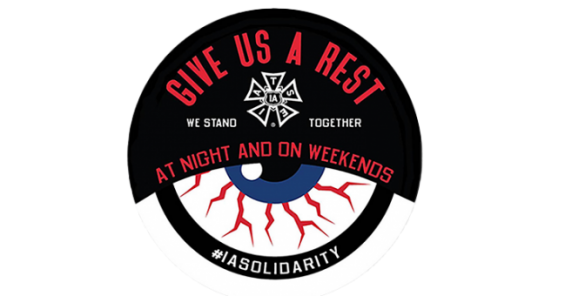 As the countdown begins for nationwide strike action by over 60,000 crew members in the U.S. film and TV industry, UNI Global Union urges the Alliance of Motion Picture and Television Producers (AMPTP) to bargain seriously and address the inhumane working hours and low pay that dominate the sector.

UNI affiliate, the International Association of Theatrical Stage Employees (IATSE), has set a date to begin strike action on 18 October, unless the AMPTP can meet demands to improve working conditions that make life miserable for workers, and even endanger their lives.

“The pace of bargaining doesn’t reflect any sense of urgency,” Loeb said. “Without an end date, we could keep talking forever. Our members deserve to have their basic needs addressed now.”

As the industry opens up in the wake of the pandemic, and streaming services push demand for content at to an all-time high, back-to-back filming has put pressure on crew members like never before. Speaking at a UNI Americas meeting on 13 October, John Lewis, Vice President at IATSE, said:

“We have a clear message: respect the workers at the workplace in the sense of rest, time to eat, and the long hours that prevent that from happening. Our membership is tired, fatigued and has had enough.”

Inhumane working hours are a problem worldwide, with producers often finding it cheaper to pay penalties rather than hiring more staff or increasing production time.

“We know that a strike is the action of last resort whenever it comes to collective bargaining. But if a strike is necessary to correct the egregious problems the workers face in this industry, then IATSE is ready.  Its members are united, the public is behind them, and the workers around the world are in full support of their determined campaign for dignity. Because every worker in this industry – no matter here they are in the world – has a stake in the outcome of this bargaining. Solidarity from UNI Global Union.”

UNI affiliate in the UK, Bectu is currently meeting with producers’ association Pact and are united in demands for fair hours.

Speaking to industry publication, Variety, Bectu’s Spencer MacDonald said that the lockdown had given many members perspective on their working hours: “They’ve had time to pause and think about the sort of industry they want to work in. And I’ve never seen anything like [it] in terms of the response from some of the crew now, [who are] pushing for the change.”

UNI Global Union will next month publish findings on working time in the film and TV industry from a survey of 28 unions in 20 countries representing over 150,000 crew members.