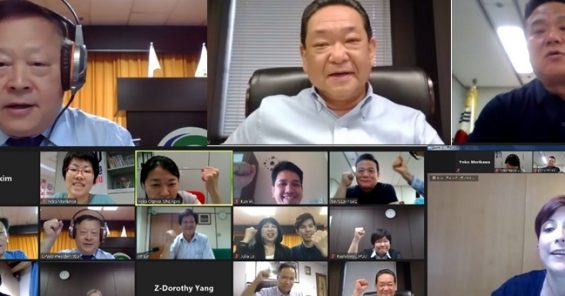 On 29 July 2020, the UNI Apro East Asia Postal Unions met virtually in place of the traditional annual forum it convenes annually since the COVID-19 pandemic broke out. The annual forum is expected to be convened physically next year.

UNI Apro Regional Secretary, Rajendra Acharya, in his opening remarks expressed appreciation for the unions’ hard work during the pandemic as essential workers for the community as well as protecting members. Outlining the overall situation in various countries in Asia and Pacific, he pointed out that the Asia Pacific reality is not very encouraging. Companies and employers are not forthcoming to discuss with trade unions and that even the role of governments in the region is found lacking as facilitator. “That’s why we have a huge role as global union representing the sectors that are either in the front line of this pandemic or essential services.”

The Presidents of CPWU Taiwan, KPWU Korea and JPGU Japan shared updates on how their respective unions worked hard to protect members during the crisis.

Taiwan’s outstanding track record for containing the spread of virus was achieved only with the massive cooperation and solidarity of its people. President Wu was very proud that the competent and dedicated postal workers of Chunghwa Post Workers Union played a key role from outbreak prevention and control to economic revitalization, and accomplishing many important tasks requested by the Government.

President Lee of Korea Postal Workers Union (KPWU) updated that since his recent election and concurrent appointment as General Secretary of Federation of Korean Trade Unions (FKTU), he has been actively involved in negotiating in the tripartite meetings to raise the minimum wage for 2021. He was pleased to announce that they managed to secure a very satisfactory increase even during the midst of the pandemic. The positive role of the union is acknowledged when it achieved a historic high of 99% of all its delegates in attendance at its annual congress held online earlier in May.

While in Japan, President Masuda of Japan Postal Group Union (JPGU) reported that the Japanese Government expressed its appreciation for the dedication of JPGU’s members in accomplishing the gargantuan mission of distributing masks to 70 million households nationwide.

Cornelia Berger, Head of UNI Post & Logistics congratulated the unions for their contributions to the pandemic efforts. She shared about the initiative between UNI and Universal Postal Union (UPU) to protect better workers’ safety during the health crisis and also plans for future virtual discussions to move the sector forward.

Yoko Ogawa, Director of UNI Apro Post & Logistics informed about the development of the draft handout on best Occupational, Safety and Health (OSH) practices for the postal sector which will be especially relevant for all postal affiliates during this historic health crisis.

The affiliates will meet virtually again on September 2 when the UNI Apro Post & Logistics Committee is convened.