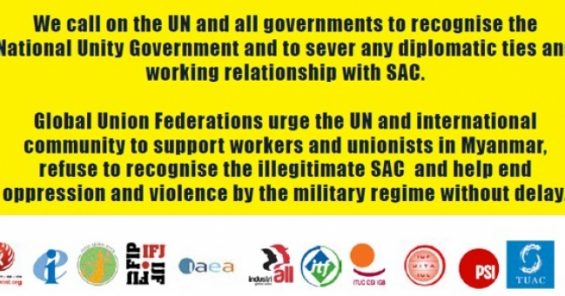 The Asia Pacific Regional Organisations of the Global Union Federations launched a factsheet today that details the extensive labour rights violations perpetrated by the Myanmar military junta since its shocking coup takeover on 1 February 2021.

The world had witnessed how the people of Myanmar bravely resisted this illegitimate grab on power. An impressive Civil Disobedience Movement (CDM) spontaneously sprang up amongst the people. Many workers and trade unionists from both the public and private sectors powered the movement.

But the people’s demands were met instead with bullets and brutal beatings from the soldiers of the junta.

Within the last three months, more than 5,000 people have been arrested or detained and at least 812 people have been confirmed killed by the military, according to the Assistance Association for Political Prisoners (AAPP).

The international and regional community had reacted negatively with the military junta’s actions. Calls for Myanmar to return to democratic civilian rule echoed within the chambers of the United Nations and various other regional organisations. The ASEAN leaders had also famously met on 24 April and advanced a Five-Point ASEAN Consensus plan to end the violence.

However, one month passed with little results to show for while more civilians, activists, and trade unionists have fallen to the bullets of the junta or were arrested on arbitrary charges.

UNI Apro joins the Asia Pacific Regional Organisations of the Global Union Federations today to urge the international community to help end oppression and violence by the military regime without delay, by:

Let democracy and the respect for human and labour rights prevail in Myanmar!