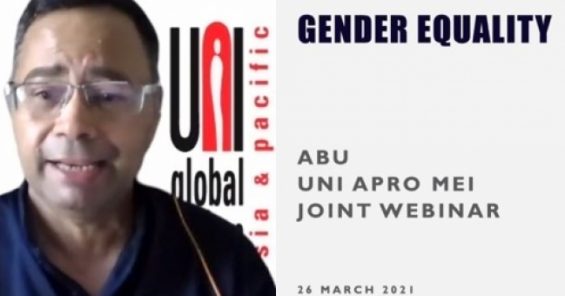 26 March 2021 – To improve gender equality in the audiovisual sector, the second of the joint webinar series organized by the Asia-Pacific Broadcasting Union (ABU) and UNI Apro MEI focused on gender equality plans, objectives, actions, as well as its implementation and monitoring phase.

Rajendra Kumar Acharya, UNI Apro Regional Secretary opened the webinar and emphasized the importance of gender equality, diversity and inclusion in an organization. “The cooperation between ABU and UNI Apro gives immense strength and the opportunity to work to better the broadcasting sector and people in this industry. In many aspects, we work on similar interests and get together to work toward the same goals.” He added.

Closing the webinar, Natalia Ilieva, ABU Head of SG Office expressed appreciation for the cooperation between ABU and UNI Apro MEI and invite everyone to join the 3rd joint webinar next month that will focus on mental health.