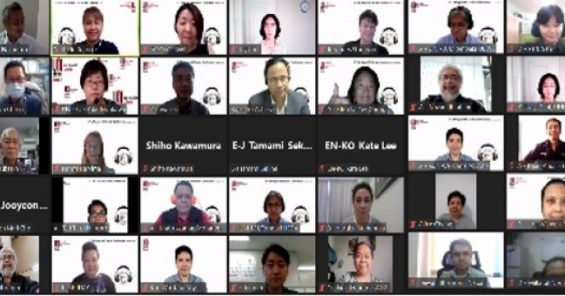 The conference with the theme of “Confronting the Challenge of Pandemic-Induced Change and Increased Repression in the Media Industry” reaffirms the importance of organising media unions in the face of a changing future of work in a post-pandemic scenario.

The second policy statement adopted is the UNI Apro MEI Strategic Action Plan 2021 – 2025.  The action plan listed five major focus areas aimed at growing and empowering strong trade unions to protect the rights and interests of MEI workers and improve the effectiveness of UNI Apro MEI to serve the needs of its affiliates better.

Despite the tight timing, the conference still featured a special panel comprising guest speakers and affiliates. Dr. Kalinga Seneviratne, journalist, and author gave a provocative presentation of an alternate economic model for media. Ms. Evelyn Samuel, former journalist, and certified mental health first-aider, gave some practical tips to deal with mental health effects from the pandemic, which was well received by the audience.

The conference also adopted a Solidarity Statement to NUMW Union Korea in their fight against the amendment of the Press Arbitration Act that limits the freedom of expression of Korean Media.