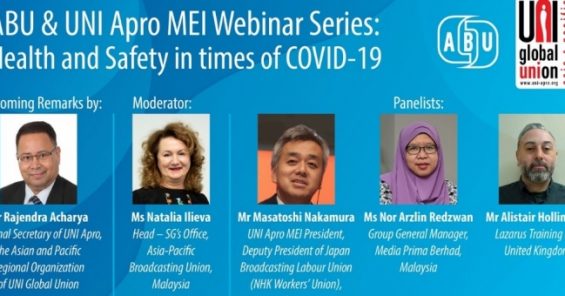 A highly anticipated joint webinar series between the Asia-Pacific Broadcasting Union (ABU) and UNI Apro MEI was launched on the 22 January 2021. The first webinar of the series, entitled “Health and Safety in time of COVID-19”, focused on strengthening the protection of the health and safety of media workers during the ongoing pandemic.

Speakers invited ranged from employer, union, and expert on safety and security in media. Together, their valuable inputs shaped a common perspective on how the media sector could better develop the health and safety standard procedures safeguarding media professionals in their daily work as essential workers.

Bro. Masatoshi Nakamura, UNI Apro MEI President and Deputy President of Japan Broadcasting Labour Union (NHK Workers’ Union) spoke on the situation in Japan particularly in NHK where there are also cases of the virus. He shared examples on how the management and the union are working closely to address the situation.

Ms. Nor Arzlin Redzwan, the Group General Manager of Media Prima Berhad, Malaysia shared with the audience on the health and safety framework developed in Media Prima during the pandemic. She emphasized that it was important to establish working arrangements which could cater to all stakeholders.

The third panel speaker, Mr. Alistair Hollington of Lazarus Training Ltd, United Kingdom. He is a highly experienced trainer who has trained media workers likely to be deployed to uncertain situations such as post-disaster zones. His presentation laid out how risk assessment is an essential component to allow media workers to complete their jobs safely.

Rajendra Acharya, UNI Apro Regional Secretary opened the session and highlighted in his speech that while the broadcasting sector was greatly affected by the pandemic, the live events sector like the theatres, stadiums, arenas, resorts, theme parks and other venues, was also devastated resulting in loss of jobs and income. He hope the lessons learnt through the joint partnership between ABU and UNI Apro would conduce to better collaboration and guidance for joint actions for the media sector in general.

Ms. Natalia Ilieva of ABU who moderated the entire session expressed appreciation for UNI Apro to partner with ABU to focus on upholding safety. She believed that people are the most precious asset of any organisation and that the health, well-being and safety of media staff should be the top priority for all especially during the pandemic.

At least two more ABU-UNI Apro MEI webinars expected to be held in February and March will address mental health and gender issues.