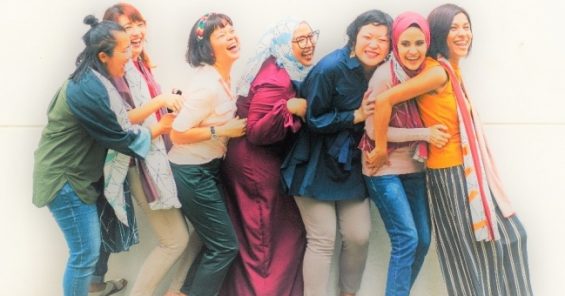 As trade unions continue to press forward in protecting jobs and workers’ safety in the middle of the pandemic, UNI Apro Women believed that rather than being resigned to circumstances, workers should continue to rise up to the challenge in bringing a fairer future for all.

Driven by this belief and strengthened by the experience over the past year in reinforcing the existing networks and communication channels amongst women members of the UNI Apro family, the UNI Apro Women organised a keynote webinar on 22 May 2021 that successfully brought together affiliates across the Asia and Pacific region to commemorate International Labour Day and International Women’s Day.

Panellists and organisers expressing solidarity with people of Myanmar

True to its theme of “Connecting People to Build a Fairer Future”, the webinar featured an impressive line-up of speakers drawn from strong women representatives among the affiliates from all the sub-regions of East Asia, South Asia, South East Asia, and the Pacific.

UNI Apro Regional Secretary Rajendra Acharya and Sis. Veronica Mendez, Head of UNI Equal Opportunity opened for the event. Their opening remarks outlined the pressing challenges that especially afflicted women during the pandemic. Stressed resources and limited institutional capacity further exacerbated the vulnerability of women. They welcome the webinar as being held at an opportune time that showcase the abilities and instil confidence in all women members.

Sis. Mirah Sumirat, UNI Apro Women President’s keynote speech paid homage to all the front liners and essential workers and those who have died during the pandemic. She alerted the audience to the pressing challenges to women in the region brought on by the pandemic. Amongst which, massive job displacement, mental stress and domestic affected women by the millions. 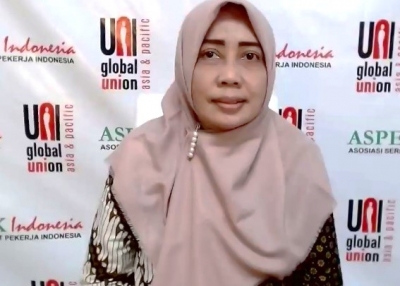 Women in the region strove to fight back against unjust labour laws and policies rolled out by various governments. They also spoke out loudly for the need to uphold decent work conditions and protecting essential workers’ rights through collective bargaining which also need to include the vulnerable and marginalised groups such as young women and LGBTIQ persons.

Equally important were the solidarity extended to people in places like Hong Kong, Myanmar, and more recently Palestine, where crackdowns on peaceful assembly and freedom of speech had adversely impacted women. Above all, Sis. Mirah urged that a “new Normal” must mean that women is included in the centre of all economic recovery plans to address long-standing inequalities.

With the key formalities over, the webinar pivoted into the key topics with Sister Julia Angrisano, National Secretary Finance Sector Union (FSU) Australia, who provided an immersive account of their experience in Australia with the issue of Remote Work and the Right-to-Disconnect, a topic highly in demand from many members.

Sister Rekha from the Federation of National Postal Organization (FNPO) India presented an earnest account of the Indian postal workers who struggled against the pandemic driven challenges to maintain their services to the greater public while addressing the internal needs of the members, in particular of women postal workers.

Sister Patricia Hung, a journalist with the Taiwan Public Television Service, gave a lively report on the participatory approach practiced and the practical steps taken to promote gender equality by her union.

A highly anticipated sharing was given by Sister Julia Fox, National Assistant Secretary SDA Australia, who gave an overview of the key issues won by the union including securing a workplace safe from Covid and violence against retail workers and winning pay rises and essential worker payment during the pandemic. She also revealed some of the ongoing research and behind-the-scenes work of SDA which have a strong gender dimension that will be of interest to many affiliates.

Brother Kenta Ando, from the UA ZENSEN Commerce Division, shared an exemplary account of UA ZENSEN’s important work to combat against irrational complaints that have been afflicting frontline staff in Japan for many years, and which have worsened during the pandemic.

Josue Grajo, Vice President of UNI Philippines Liaison Council Youth, gave the penultimate sharing on how unions can play a role in combating LGBTIQ prejudice, an issue that was recently inducted into UNI Apro Women’s work.

Rounding off the webinar was Alice Chang, Director for UNI Apro Women. She praised the dynamic sharing of all the presenters and reminded the audience that the focus on women’s issues should not be limited to the one day internationally dedicated to women.

The advances made prior the pandemic are now severely threatened and could even worsen. She reiterated UNI Apro Women’s position against all forms of injustice and violence. This requires trade unions to fully incorporate women’s concerns to preserve and advance everyone’s dignity and their rights fully. One concrete agenda ahead she highlighted is the ratification campaign of the ILO Convention which comprehensively addresses violence and harassment in the world of work.