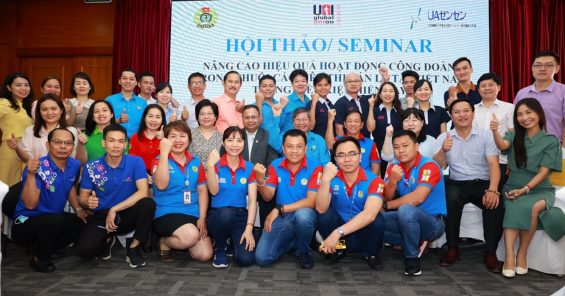 A three-member UNI Asia & Pacific (UNI Apro) delegation paid a visit to Vietnam from 23-27 May 2022 to strengthen further the cooperative relationship between the organization and the Vietnamese Trade Unions.

The delegation, headed by the Regional Secretary Rajendra Acharya and including UNI Apro Director of Commerce Alice Chang, UA ZENSEN Director of International Affairs and UNI Apro Executive Committee Member Hanae Nakano, over the five days, took part in a joint activity with the Vietnam General Confederation of Labour (VGCL), visited UNI affiliate, the Vietnam National Union of Information and Communication (VNUICW), and met with the Vietnam National Union of Bank Workers (VNUBW).

The fruitful visit saw an exchange of ideas and information. It inked down cooperation plans with the VGCL to establish a national union for retail food workers, received updates from VNUICW, and the possibility of fostering cooperation with the VNUBW.

The delegation took part in a joint seminar co-organized between UNI Apro, UA ZENSEN, and the VGCL held over 24-25 May on “Improving Effective Performance of Trade Union Activities in the Vietnamese Retail Sector”.

Led by the VGCL, 31 Vietnamese participants from the seven unions comprising the Vietnam Commerce Union Network heard from UNI affiliates taking part online about their experiences of organizing retail and commerce workers in Indonesia, Malaysia, and Singapore. Hanae Nakano enriched the sharing with UA ZENSEN’s experience in Japan.

In a bilateral meeting between UNI Apro and the VGCL to exchange information on labour and trade union issues in Vietnam and the region, the VGCL Senior Vice President Tran Thanh Hai expressed his gratitude and appreciation for UNI Apro’s long-term cooperation and effective support to the Vietnamese trade unions over more than 25 years.

The delegation later met with the VGCL Organizing Department and reached an agreement on a time frame focusing on the VGCL’s plan to establish a national union for food retail workers.

Following the successful event with VGCL, the delegation next visited the UNI affiliate, the Vietnam National Union of Information and Communication (VNUICW), representing 42.6% of the 85,000 workers in this industry.

In their meeting, the delegation was warmly received and briefed on the latest developments by President Chu Van Binh and his team. VNUICW Vice President Tang Thi Hoa, the UNI Apro Women Committee co-chair, highlighted that more than 40% of their Executive members are women. They are undertaking activities to raise the importance of eradicating workplace violence and promoting equal opportunity and workplace skills training.

The delegation also heard from Mr. Tran Vu Ha, VNUICW Vice President and President of the Vietnam Post. He informed that the postal services would expand into the e-commerce market by opening a convenience store, POSTMART, in 13,000 post offices. This is done with the cooperation of the Japan Post.

The delegation finally met the Vietnam National Union of Bank Workers (VNUBW) to discuss updates on the trade union activities and common concerns. Mr. Nguyen Van Tan, Standing Vice President, shared the strategic action plans of VNUBW, while Mr Tran Hong Tuan, Standing Vice President, highlighted the union’s achievements since their last congress in 2018. The union had impressively organized over 160,000 workers out of the 170,000 workers in the banking and finance institutions, including foreign-owned banks. Rajendra complimented the VNUBW’s success and expressed hopes of closer cooperation between the two organizations soon.