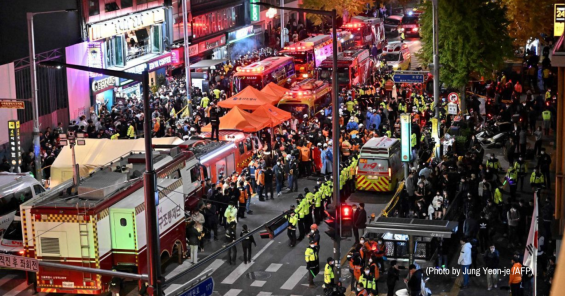 At least 149 people were killed and another 150 injured after they were crushed in a large Halloween crowd in Seoul on 29 October 2022. The crowd surge, where as many as 100,000 people, local news media said, had clogged the narrow streets of the Itaewon nightlife district 29th evening for Halloween festivities.

Photographs on social media showed citizens, police officers and emergency medical workers performing cardiopulmonary resuscitation on people sprawled on the pavement. Of the dead, at least 101 were transferred to nearby hospitals, while 45 were taken to a multipurpose gymnasium (New York Times)

“I wish to express my sincere condolences over the tragedy last Saturday in Itaewon that claimed more than 150 lives and left many more injured, some still in serious condition. This tragedy marks Korea’s worst disaster since 2014 when the Sewol ferry sank.  We have been deeply shocked and saddened to learn that most of the fatalities were young, with more than half of them being women.

On behalf of the UNI Asia & Pacific, I offer my best wishes to the survivors and pray that the injured will recover speedily. Most importantly, I wish that the bereaved families would be able to find peace and comfort as they grieve the loss of their loved ones.” Rajendra Acharya, Regional Secretary, UNI Asia & Pacific