UNI calls on METRO to stop union-busting in Pakistan 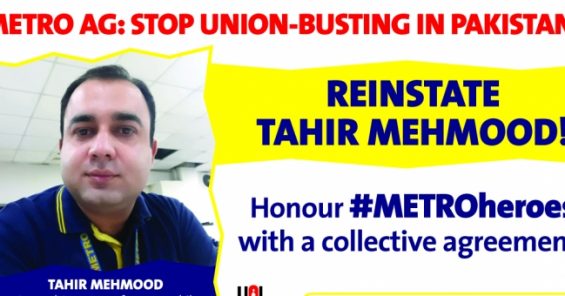 UNI Commerce calls on unions, workers, labour and human rights activists and all those concerned with social justice from across the globe to sign a Labour Start petition calling for Metro to reinstate Mehmood.

Tahir Mehmood was dismissed in February 2021 for absenteeism that occurred in 2017. In addition, almost half of the current union office bearers have been targeted by the company through warnings, notices, change of workplace and employment status and dismissals.

At one point there was a second union at the company, not affiliated to UNI. METRO management fired its leaders and refused a collective bargaining agreement with this union as well.

Back in 2018, a new referendum was held to identify the collective bargaining agent (CBA) union and Metro Habib Employees Union, a UNI Global Union affiliate, was certificated as the CBA union in 2019. The negotiations started and the parties had 15 meetings (some lasting 5 minutes) until May 2020 but could not reach an agreement as Metro Pakistan was not bargaining in good faith and denied almost all fair demands of the union.

“While we were engaging with Metro Global management on how to unlock the dispute under the challenging conditions caused by Covid-19 outbreak, the local management pursued a systematic union-busting campaign,” said Mathias Bolton, Head of UNI Commerce. “The fact that the union’s general secretary and other union leaders’ dismissals happened during a period where the parties should be in collective negotiations is outrageous and violates all the norms and best practices of global labour relations.”

Another union leader Saeed Ahmad has been sacked on grounds of inadequate performance and some other union leaders also face the risk of losing their jobs under an inhumane appraisal system employed by the company.

“Imagine a performance assessment system solely based on subjective considerations of the managers over performance criteria. Workers are expected to fully meet criteria and any worker who is rated below 100 per cent two years in a row can be dismissed for unsatisfactory performance. Even if a worker has an exceptional performance and performs over 100 per cent, the worker can still be dismissed for inadequate performance if they have been given a unilateral warning letter in the previous 12 months,” said Bolton.

“It may sound dystopic, but this is the performance assessment system used by Metro Group in Pakistan to intimidate workers, especially union leaders and activists. That is another reason why Pakistani Metro workers deserve a fair collective agreement, decent rights and proper job security.

“Metro’s cruel treatment towards union leaders and workers in Pakistan is simply unacceptable and would never be tolerated in Germany. We will take further actions on every possible platform if Metro does not reinstate Tahir, stop union-busting and engage in sincere negotiations with the union with the aim of concluding a collective agreement,” said Christy Hoffman, UNI General Secretary.

UNI Global Union with support from local partners in Pakistan is currently investigating other instances of intimidation and abuse at Metro Pakistan and will be compiling a report to be released at a future date.

The banner for solidarity photos in multiple languages can be downloaded here.