UNI calls on multinational banks to divest from Myanmar 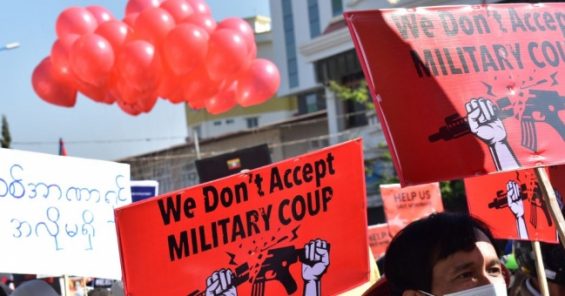 UNI Global Union is calling on multinational banks with investments linked to the military junta in Myanmar, including Credit Suisse and UBS in Switzerland, and Bank of America, JPMorgan Chase, Morgan Stanley and Wells Fargo in the USA, to urgently divest from their shareholdings in the country, following the coup d’état in February.

The banks have at least US$1 billion invested in shareholdings in companies that have direct or longstanding commercial ties to the Myanmar’s military or links to state entities that the military is controlling as a result of the coup.

In letters sent to the banks on 28 July, UNI says:

“In the current situation following the coup in Myanmar, urgent and heightened due diligence activities are needed by all companies with business relationships in the country given the severity of the human rights’ impacts,” and calls on each of the banks to divest from a named list of their shareholdings that are linked to the regime. The letters to U.S. banks have also been co-signed by the Committee for Better Banks.

The action follows an updated report produced by BankTrack and Justice for Myanmar identifying 19 internationally-operating banks with more than US$65 billion invested in companies linked to the Myanmar regime and its atrocities.

The military’s increasingly repressive crackdown against pro-democracy protesters has led to hundreds of deaths, including summary executions, with thousands more detained, tortured, and injured. At least 75 children have been killed, and up to 1,000 children detained, the UN recently reported. Meanwhile, Covid-19 is surging through the country, particularly in detention centres where many of the opponents to the regime are incarcerated.

The letters come after UNI’s Management Committee adopted a statement on 21 May condemning the Myanmar coup in the strongest possible terms and pledging “to do everything possible to support the fight for rights and democracy in Myanmar.”

“It is simply not acceptable to pretend it’s business as usual for banks with investments linked to the military regime in Myanmar. These banks have a responsibility to do all in their power to help stop the bloodshed and restore democracy in the country. By divesting their shareholdings in Myanmar, they have the potential to weaken the economic strength of the military junta and send a strong signal that the ongoing and grave human rights violations will not be tolerated.”

“The coup in Myanmar has received global condemnation and we urge multinational banks with ties to the military junta to act quickly and to disassociate themselves from this barbaric regime. People are dying and there is no time to lose.”

Under the United Nations Guiding Principles (UNGPs) and OECD Guidelines, all business enterprises, including investors, should take the necessary steps to cease, prevent, or mitigate adverse human rights impacts which they cause, contribute, or are directly linked to through their business relationships.

As clarified in the OECD’s guidance on Responsible Business conduct for institutional investors, “an appropriate response once adverse impacts have been identified may include divestment after failed attempts at mitigation, where the investor deems mitigation unfeasible, where the investor policy dictates exclusion, or simply because of the severity of the adverse impact.”

The Committee for Better Banks is a coalition of frontline bank workers, consumer and community groups, and labour organizations, including the Communications Workers of America, uniting to raise standards in the finance industry.