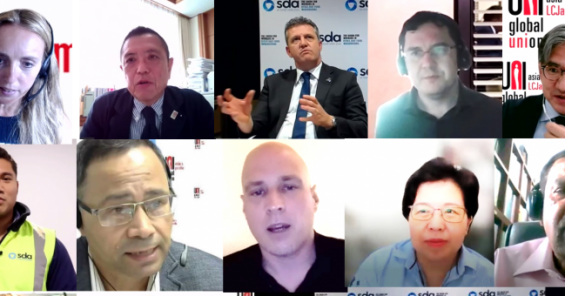 Over 100 trade union leaders and activists from across the globe participated in a UNI Asia and Pacific Commerce webinar designed to help unions and workers cope with the onslaught of digitalization in the retail sector. The webinar stressed the fundamental importance of organizing e-commerce workers, strengthening social dialogue and building strong unions to ensure that workers don’t take the brunt of the negative impacts of digitalization.

The pandemic has forced commerce companies, consumers, workers, and unions to undergo rapid changes that will have long-lasting political, social and economic implications.

UNI Asia and Pacific Regional Secretary Rajendra Acharya opened the webinar by underscoring the devastating impact the pandemic has had on millions of workers, whilst paying credit to the brave UNI Asia and Pacific affiliates and members who worked tirelessly through a global pandemic to protect their communities, families and societies.

“UNI Asia and Pacific remains focused on organizing and building unions. Organizing is the key to ensure essential workers’ essential rights, particularly in the commerce sector,” said Acharya. “Only by building worker power and strong unions can we tackle the challenges which have been accelerated and magnified by the pandemic.”

Head of UNI Commerce Mathias Bolton agreed that the sector had already been undergoing rapid changes from digitalization, but that the pandemic had amplified the speed at which it was happening.

“The psychology of commerce companies has changed. Some are still doing the right thing and engaging with unions and workers, but many more are going in the opposite direction,” said Bolton. “Throughout the pandemic, companies have largely ignored workers’ concerns whilst introducing practices they would never have attempted before.”

Bolton also outlined the groundbreaking work of UNI Commerce affiliates to tackle the exponential growth of violence and harassment against retail workers during the pandemic. After unions all over the world campaigned on this issue, companies were forced to act and put a stop to the escalating aggression against retail workers. Jennifer Trad, an SDA workplace delegate, explained that the groundbreaking use of body cameras worn by staff members had helped to reduce harassment in stores.

Shoichi Hachino, Vice president of UA Zensen Japan, UNI Commerce and UNI Asia and Pacific, focused on the importance of a people-centered approach to digitalisation, arguing that “We must redefine the corporate vision and put people before profit, in order to build decent, sustainable work and ensure that people aren’t left behind by digitalization.”

“The growth of e-commerce has led to a rise in fulfilment or distribution centres, but we shouldn’t make an arbitrary differentiation between these workers and traditional retail workers – we should see it as a challenge to organize all these workers and strengthen the position of retail workers across the board,” said Smith. “The critical issue is to secure better wages,  working conditions and ensuring decent jobs for all.”

Marcel Spatari, Head of SYNDEX Romania, outlined the sobering emergence of two key trends  which could have a massive impact on workers’ mental health and job security – automation of warehouses and an increase in employee monitoring and surveillance.

The webinar reiterated to unions worldwide that the only way we can tackle the impact of digitalization is by organizing workers, building strong trade unions and holding companies accountable.