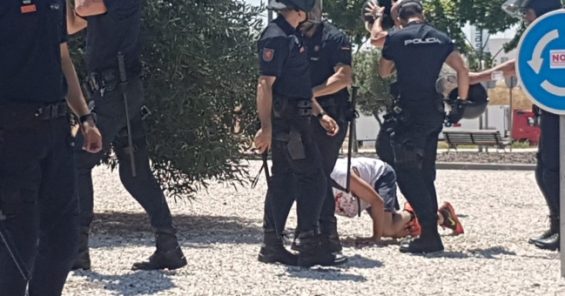 Peaceful picketers were met with police batons during the second day of a three-day strike at Amazon’s suburban Madrid fulfilment centre.

According to media accounts, Spanish National Police officers in riot gear began charging striking workers at around 2:30 p.m. yesterday. The police alleged that the strike was blocking traffic—a claim disputed by the Comisiones Obreras (CCOO), the majority union for Amazon workers on a national level.

During the assault, one worker was bloodied and lost teeth after being clubbed in the head. Three workers were injured.

“Amazon workers were demonstrating against the repressive practices inside the company’s warehouse, only to be met with police violence outside,” said Christy Hoffman, General Secretary of UNI Global Union.

“This attack appears to not only be an assault on Amazon workers, but on the basic human right of freedom of association and the constitutionally protected right to strike. We call for an investigation into the police’s behaviour, and we demand that Amazon stop its campaign of coercion against workers,” Hoffman continued.

Two workers were arrested and released later that afternoon.

During the first day of the strike, the CCOO reported that more than 80 percent of the 1,600-person workforce participated in the strike. The only workers to cross the picket line, the union said, were temporary employees threatened by local management.

Amazon workers launched the three-day strike on Monday to coincide with the company’s “Prime Day” promotions. The strike at the facility, located in San Fernando de Hernares, protested wage cuts, working conditions, and restrictions on time off. Amazon has refused to reach a fair collective agreement with Spanish workers.

The strike was joined by Amazon workers in Germany and Poland, and it was supported broadly by the global labour movement.