UNI Global Amazon Alliance—Victory in France, Strikes in Spain and Germany, Pressure in the U.S., and more 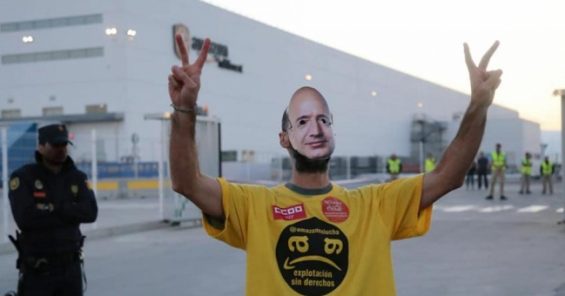 The holiday season did not mean a break for Amazon workers who want the company to respect their rights, and in the New Year, we’re building off 2018’s successes. There were several days of strikes in Spain and Germany. Workers in France won a bonus. In the U.S., the controversy over huge HQ2 tax giveaways continues. And the GMB shows that working at Amazon isn’t a game.

French Amazon workers are getting a €500 bonus after the CGT launched a push to get the company to pay up. The CGT’s campaign came after French President Macron called on employers to give workers bonuses in response to the Yellow Vest protests.

Also in France, the CGT reported in a recent article that Amazon has destroyed 3.2 million new, unsold products in France. This practice is clearly bad for the environment and could hurt the small sellers using Amazon, but it also exposes Amazon’s unsustainable culture of putting profit before people and planet.

In the United States, the $3 billion in tax giveaways for the New York half of HQ2 continues to draw fire. The RWDSU recently organized an exchange between lawmakers in Seattle, home to Amazon HQ1, and New York City leaders to discuss how avoid the problems Amazon created in that city.

Also in New York, Staten Island workers surfaced their organizing campaign with the RWDSU at Amazon’s warehouse there.

And UNI General Secretary Christy Hoffman and Sharan Burrow, General Secretary of the ITUC, joined RWDSU President/UNI Commerce President Stuart Appelbaum at a panel on the “Future of Work,” where discussions of breaking up Amazon were had.

Spanish and German strikes show a holiday season of discontent

This holiday season saw an intense period of strikes in Spain and Germany, stretching from Black Friday (23.11) to Three Kings’ Day (6.1).

The vast majority of workers at the San Fernando de Henares, outside of Madrid, participated in strikes coordinated by CCOO, and they demanded an end to worsening conditions in warehouse.

In Germany, hundreds of ver.di members walked off the job at warehouses throughout the country. At the Leipzig facility, one mid-December strike lasted a week, and workers continued to stay outside even though the strike came during their bonus week.

If you’ve never worked at an Amazon, the GMB developed a game, “Workers are not robots,” to give you a sense of the punishing pace. Playing with the sound on is recommended.

A few quick things to note: