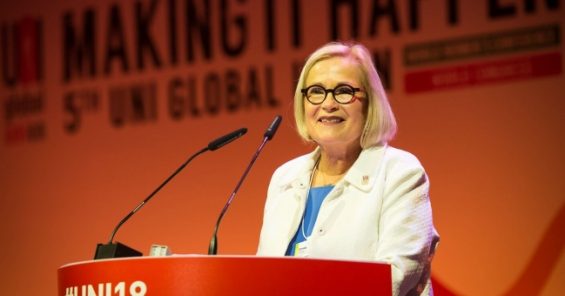 The election of Hoffman, a labour leader from the United States, represents a renewed focus on worker organising for the global union and a new challenge for global bad employers like Amazon.

“In every country, working people face corporate greed, inequality, low wages, attacks on collective bargaining, and the rise of the gig economy—often with xenophobia and right-wing extremism thrown in for good measure,” she said in her acceptance speech.

Hoffman continued: “And let’s face it. No solitary worker, no single union, and no individual country can turn the tide in a world with global corporations setting the rules of the game, in an economic model for the few and not the many. We must do it together.”

While Deputy General Secretary of UNI, Hoffman has worked closely with UNI’s strategic campaigning department, UNI SCORE, which has supported nearly 150 campaigns worldwide in every continent. UNI has won 50 global agreements that allow workers to organise without fear at major employers such as H&M, Orange, G4S, and Société Générale.

She will elevate this important work in her new role. For example, UNI is growing its investment in regional and national organising centres in Colombia and Central Europe.

Sharan Burrow, the General Secretary of the ITUC said of Hoffman, “The ITUC congratulates UNI for electing Christy as your new General Secretary. Christy has organising in her veins. A great strategist and a fighter to the core. She makes it happen. Christy is a sister, a friend and we will stand along side of her 100 percent.”

TUC General Secretary Frances O’Grady seconded that by saying, “Christy Hoffman is set to change the face of the trade union movement, and believe me that she has organising in her blood.”

In addition to traditional union campaigns, Hoffman is also an architect of the Bangladesh Accord for Building and Fire Safety, initially signed in 2013 and renewed earlier this year. The Accord has made work safer for millions of Bangladeshi garment workers while holding brands accountable for their outsourced production. It is widely regarded as the preeminent model for supply chain justice, and Hoffman has negotiated nearly USD$3 million in settlements with delinquent brands to fund factory repairs.

Over the past several years, she has advanced UNI’s leadership in using international mechanisms to hold corporations accountable, like the OECD Guidelines, and as General Secretary, she pledges to bolster their use.

“Collective bargaining is now clearly recognized as a solution to the world’s crisis of income inequality and declining wage share. And so we must seize the moment, and lead the charge to translate the intellectual argument into real-world, policy solutions and real-world victories for workers,” she said.

Jennings said, “This might be the closing of one chapter, but there are more chapters to come.

“Under Christy’s leadership the organization that we’ve built over the last 18 years will go from strength to strength and continue on the path to breaking through and organizing.”

A full bio is available here.

Christy Hoffman is the newly elected General Secretary of the UNI Global Union, a federation of 20 million service workers from more than 150 countries. Through her successes as an organiser, strategist, and negotiator in the international trade union movement, she has acquired the experience and vision necessary to guide UNI Global Union into the future.

Her leadership is rooted in the belief that worker empowerment and collective bargaining are the answers to a rigged global economy that prioritises corporations over people and planet.

Hoffman’s lifetime commitment to the labour movement began in Connecticut on the shop floor of a jet engine factory, where she was elected chief steward of the 2,000-person facility in 1978. She went on to join her union’s staff as an organiser and rose through the ranks of the International Association of Machinists, a rare feat for a woman in that time.

In 1997, as an attorney for the International Brotherhood of the Teamsters, she helped spearhead a national campaign to create full-time jobs from part-time work at UPS—something that seemed impossible at the time. Hoffman’s team developed a coordinated strategy with more than 200 local unions for negotiations, and when bargaining broke down, she helped plan a historic national strike in the United States, which led to an agreement with the company creating 10,000 new full-time jobs.

Hoffman’s work as a union attorney also included serving as counsel during a seven-month national miners’ strike in 1993 and reaching an organizing agreement between SEIU and one of the largest health-care employers in the United States.

In 2004, she began her first position at UNI as Head of Property Services and negotiated global agreements—pacts allowing workers to have a fair process to organise—with the sector’s largest employers: ISS, G4S, and Securitas.

After returning to SEIU to lead their international organising department and federal initiatives program, Hoffman came back to UNI to assume the role of Deputy General Secretary in 2010.

In this capacity, she has focused on strengthening workers’ power within multinational corporations; growing unions globally; and improving legal and institutional frameworks, such as OECD Guidelines.

Christy Hoffman has a law degree with honours from New York University and a BA in Economics from Smith College. She is married with two children