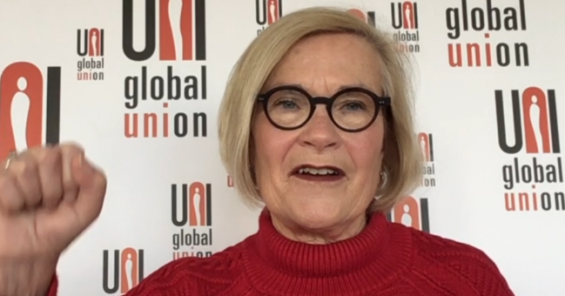 In her message, General Secretary Hoffman declared that UNI and its sister global unions were using Human Rights Day as platform to demand justice in the Philippines.

She expressed solidarity with the labour movement in the Philippines as they combat violence against trade unions—even assassinations against union activists—and attacks on trade union rights in the country. Hoffman praised the UNI Philippines Liaison Council for its persistent efforts in speaking out and defending workers’ rights.

Hoffman noted that the Philippine labour movement struggles tirelessly against the constricting of civic space when defending workers’ rights. Many labour leaders and union members there live in fear of unexplained disappearances and targeted killings. They face being “red-tagged,” or wrongly accused of extremism. This label has caused many peaceful human rights defenders to go into hiding for their safety.

“Red-tagging,” Hoffman says, has undermined efforts of unions to hold employers and the government to account for their anti-labour actions. For example, the politically motivated denial of the broadcasting license to the ABS-CBN network threw 11,000 media workers out into the cold. It also severely affected the country’s media freedom and freedom of expression.

These various problems were called out by the ILO Committee on the Application of Standards in 2019, but the situation continues to deteriorate.

The world is watching, and all UNI Global Union members will be watching too.

The ITUC and GCU are mobilizing workers around the world to defend human rights in Philippines. Find out what you can do here.