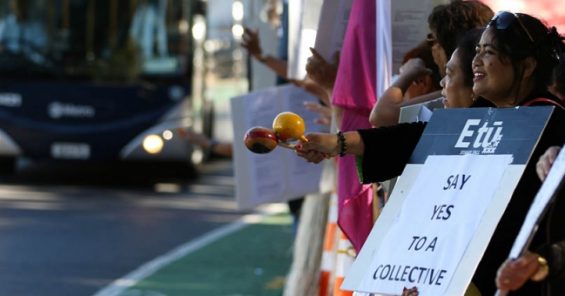 E Tu has been working tirelessly to achieve a fair deal, better working conditions and guaranteed hours for Lifewise workers. After a year of uncertainty and danger from the threat of Covid-19, the home care workers deserve the essential rights their work merits.

Instead, they have been rewarded with insecure jobs, low guarantee of hours, inconsistent access to PPE and now the threat of lockout. Even during a global health crisis, inadequate sick leave meant that Lifewise workers were unable to self-isolate, recover or care for their families when ill, leaving them at increased risk of mental health issues due to stress and anxiety.

“Striking is the only way to get the money my family needs to pay the bills,” said one Lifewise worker and E Tu member. “Taking action is the only way we can get Lifewise to listen to our demands.”

“We all know that throughout the pandemic, care workers have not received the recognition or respect they deserve,” said Head of UNICARE Adrian Durtschi. “To make things worse, Lifewise has also been pushing the anti-union message that to avoid being locked out, workers should leave the union.”

Lifewise is a Methodist Church organization whose mission statement is to ‘alleviate human suffering and seek justice, freedom, and peace’.”

“UNI stands in complete solidarity with E Tu members fighting for respect and dignity on the job.

We urge management to uphold their company values and negotiate a fair contract with the union, making sustainable changes to improve working conditions and subsequently care for clients.”

Home care workers have played an essential role in protecting vulnerable people in our communities. UNICARE stands shoulder-to shoulder with them in their demands for a fair contract.

UNI Global Union represents more than 20 million workers from over 150 different countries in the world’s fastest-growing sectors – skills and services.