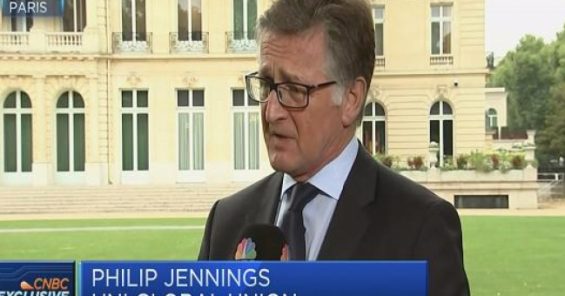 In an interview with CNBC television at OECD Week in Paris, UNI Global Union General Secretary Philip Jennings addressed the growing inequality which is destabilising the world, the rise of populism in Europe and the need for politicians to reconnect with the people.

Jennings said there was good reason for the backlash against the model of globalisation that only benefits the 1%, citing trade agreements as an example:

“The trade agreements that were done were done without a social dimension. We told the world as a labour movement that this means a race to the bottom, we like trade – we like investment, we don’t have problems with ethical foreign direct investment but when it’s done on the terms that it was done that drive wages down, you have a race to the bottom, it’s a globalisation that does not  work.”

The UNI GS said it was high time to change the rules of the game:

“Why can’t we have inclusive growth? Why can’t we move away beyond measuring just GDP? What are we doing as communities to include people in the wealth that is created? Wealth at the moment is floating to the 1%. This is an economics for the few not the many.”

Jennings said there was a real threat to our democracies:

“When you exclude people, when hope disappears, when their ambitions for their children  can’t be fulfilled you get a backlash, and therefore politicians have to reconnect with the concerns of people. They have to reconnect to  improve their living conditions, improve their work experience,  and to say that we are going to accompany you through this digital revolution in the workplace. The backlash is deserved and now it is a time for those with political responsibility  to do something about it.”

“We feel that democracy in Europe and elsewhere is going through a very difficult  phase, if not a crisis. Why? Because the people feel  disenfranchised and that the economy hasn’t been working for them; that the governments bailed out the banking system, and today  the banking system is doing very well thank you BUT it is not making a material difference to workers’ lives.”

The UNI GS called on the Left to seize the initiative:

“The Left, the social democratic  parties have a chance for rebirth, to take this message to build a political  platform around the future of work and investment in people.

Jennings went on to say:

When you look at the right wing forces in Europe they do not have a clear economic agenda or a business agenda, it’s based on division and hate but when it comes down to it there’s no coherence to the economic message  they are bringing. They are not interested in strengthening the trade union movement and strengthening collective bargaining. In the end they are betraying working people”

Watch the full video and read the CNBC article here