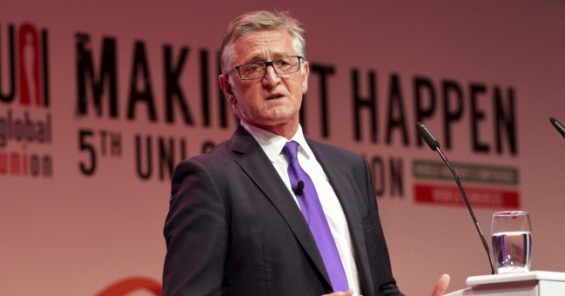 UNI Global Union General Secretary, Philip Jennings who will step down as GS on Monday, was given an emotional farewell by the UNI Women’s Conference.

The head of UNI Equality, Veronica Fernandez Mendez said that not only was Jennings a charismatic leader but he was also a feminist because of the influence strong women his life both professionally and personally.

Jennings encouraged UNI Women to continue the fight saying that although some progress had been made since some women in the UK won the vote a hundred years ago, much was left to be done.

The UNI GS cited a quote from Nelson Mandela: ‘Freedom cannot be achieved unless women have been emancipated from all forms of oppression.’

That quote is engraved on Mandela’s statute in Parliament Square in London where up until recently only statues of men were to be seen.

“Now there is a woman’s statue in that square and she is a militant suffragette, Millicent Garrett Fawcet,” Jennings said.

“She is holding a banner which says: ‘Courage calls to courage everywhere, ’ and you gathered in this room are examples of that courage.

“Together we are all stronger together. I am here to salute you and your work. My message: Keep on fighting! We all know the fight is not yet won!

Men should all become feminist. It would be better for democracy, for peace, for the economy, for all the human race,” concluded Jennings.

In his final bow as UNI General Secretary at a UNI Women’s Conference, Jennings paid warm tribute to the leadership team of outgoing President Denise Mcguire.

Finally Jennings said he was proud that two women would be taking the helm at UNI Global Union, Christy Hoffman and Alke Boesigger.

“They will strive for a future of work that is not a new exclusion zone for women.”