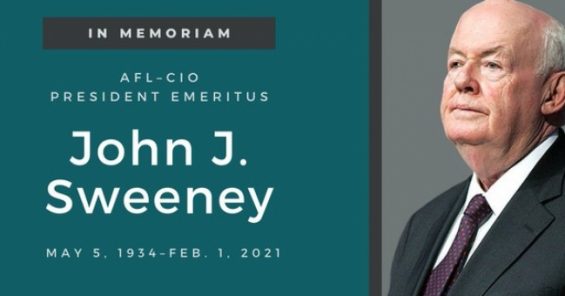 The global trade union movement lost a giant with the passing of AFL-CIO President Emeritus John Sweeney this week.

President Sweeney was a leader of the union now known as 32BJ SEIU, SEIU’s largest union of cleaners and security guards, for twenty years before becoming the SEIU President in 1980.  Under his leadership, the union nearly doubled its membership.  He built a renowned organizing program and elevated young organizers, women and people of colour into positions of responsibility within the union. In 1995, he was elected to lead the AFL-CIO on a platform marked by a recommitment to organizing, an expansion of workers’ political strength, a growth in inclusion and union democracy.

John Sweeney’s commitment to the advancement of worker power extended well beyond the U.S. border.  He was a fierce globalist and an important leader in FIET, one of UNI’s founding organizations.  His drive to raise standards for the cleaners and janitors of the world led to the creation of UNI Property Services.

Christy Hoffman, General Secretary of UNI Global Union, said, “We are deeply saddened by President Sweeney’s passing. We have all been touched by his legacy. As a trade unionist from the United States, I witnessed first hand his bold and forward thinking – he modelled humanity coupled with toughness and set an example for all of us. And he had a profound appreciation for international work, leaving his mark on UNI and building the pillar on which UNI Property Services stands today. Our thoughts are with his family and the many who called him a mentor and friend.”