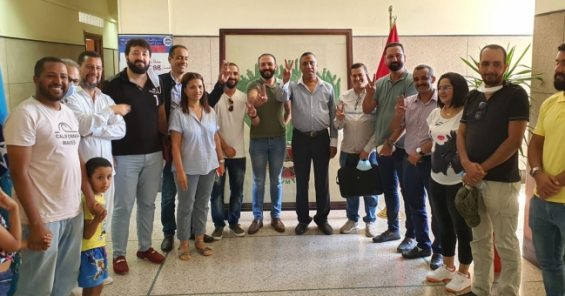 UNI is supporting its affiliate the Union Marocaine du Travail (UMT) in its calls to reinstate dismissed union activists at French outsourcing multinational Webhelp and American-based call centre operator Sitel owned by the Mulliez family in France. The UMT says that the unjust firings are the result of the workers’ union leadership.

General Secretary of the UMT Miloudi Moukharik told the activists, “Your struggle is that of the whole UMT. We will not rest until these dismissals are reversed and trade union rights are respected by both companies.”

At Webhelp, the terminations came after the formation of trade unions at several of Webhelp’s workplaces was met with vehement attempts to block UMT organizing in Fez, Rabat, Salé and Kenitra.

The company blocked access to worksites, intimidated candidates for union representative positions, and suspended the Webhelp Rabat UMT leader in addition to the sacking of trade union activists.

Many of the dismissed workers have families to support and have not been paid for over two months.

At Sitel in Rabat, the story is much the same. Employees who set up a trade union office with UMT were summarily sacked for their organizing efforts. Workers who had been working from home were given no warning of their dismissal and were shocked to find that their access to their IT equipment had been instantly suspended.

Both companies have repeatedly shown through their anti-union attitude that they have no desire to engage in meaningful dialogue with their employees or their unions.

UNI is calling for both companies to reinstate workers and to engage with its workers through the union.