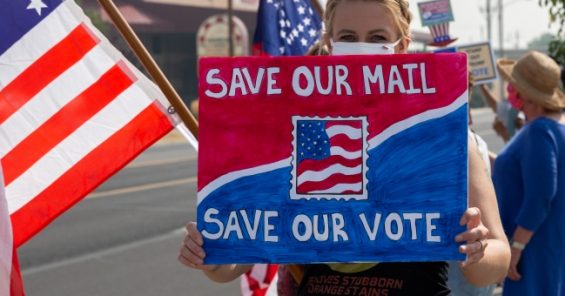 Representing more than 2.5 million postal workers worldwide, UNI Global Union stands in solidarity with its postal union affiliates in the United States of America. The statement comes as U.S. postal workers are holding a day of action on 25 August 2020 to #SaveThePostOffice.

Despite the recent announcement by Postmaster General Louis DeJoy that ​the U.S. Postal Service will suspend a slate of proposed changes, UNI remains alarmed by recent attempts to weaken the USPS during the pandemic and reduce its capacity to process millions of mail ballots before the Presidential election on 3 November.

“The United States Postal Service is being held hostage by a government intent on doing everything in its power to block postal voting in the run up to the election and undermine a trusted, necessary institution. The postal service, in the United States and globally, is a public good and a key function of government, not a pawn in an election campaign,” says UNI General Secretary Christy Hoffman.

UNI is strongly opposed to any measures that cause delays to the postal service, particularly during the heightened needs of a pandemic. Millions of American citizens rely on the postal service for prescription deliveries and social security and disability payments.

“The intentional degrading of the post office is undermining the physical and financial health of Americans while attempting to strip people of their most basic right in a democracy,” adds Hoffman. “Furthermore, this appears to be part of an overall right wing plan to undermine government, including popular, necessary services like Post.”

The U.S. has spent billions of dollars bailing out the private sector during the pandemic; it must help the public sector too.

The United States Postal Service employs over 630,000 people most of whom have been working tirelessly throughout the crisis, at risk to themselves and their families. Coronavirus has increased financial pressures on the postal service and it needs the government’s support during this crisis.

The current and deliberate downgrading of the U.S. post office will further impact revenues and cannot be used as a ruse to privatize this most trusted and essential public service.

The attack on post is not limited to the United States. UNI’s Post & Logistics sector is standing with unions in Brazil, where nearly 100,000 workers are striking to protect the post against privatization. Across Europe, UNI has launched a “Save our Post” campaign to beat back further privatization there as well.