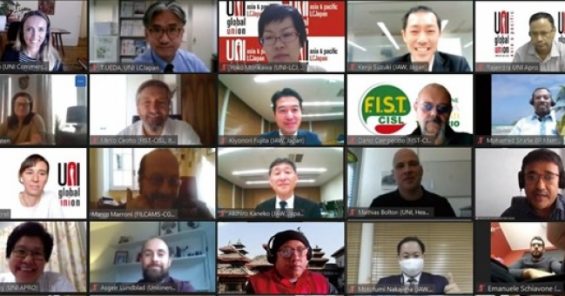 Some 33 trade union representatives from seven countries in Europe and Asia attended the first ever meeting of UNI Global Union’s newly launched network for workers in car sales.

The online gathering on 13 November was organized in cooperation with the UNI Liaison Council Japan (UNI-LCJapan) and included participation from unions in Italy, Japan, Malaysia, Nepal, Pakistan, Romania and Sweden.

The idea for the network was proposed by UNI’s Japanese affiliate JAW (Confederation of Japan Automobile Workers’ Unions) which also played a central role in organizing the first meeting.

“We are witnessing in the biggest change in a hundred years – the structural change of the automotive industry has a lot of influence on the labour environment and employment. I welcome this UNI network which I am sure will deepen the exchange of information and contribute to the solidarity of workers involved in automotive sales.”

The meeting discussed the challenges to the sector including the drop in sales due to the impact of Covid-19, and an ageing and declining population. While the sale of electric cars is increasing, it still isn’t a big share of total car sales and the it is expected that it will take a considerable amount of time to recover economic activity to levels pre-existing the pandemic.

New technology and digitalization is also impacting the car dealers market, with workers needing new skills and knowledge to sell different services, such as finance and insurance, in addition to knowledge of the cars.

In all the countries represented, workers are covered by a collective bargaining agreement, although in some countries such as Nepal there is antagonism and threats made by workers wanting to join a union.

“I am happy to be working with JAW and other affiliates across Europe and Asia on this specific segment of retail. UNI Commerce has taken the step to build power and grow union strength across subsectors – we started with hypermarkets and fast fashion, and now we have launched this new network for car dealers. The network will help with solidarity actions when needed and will foster the exchange of good practices.”