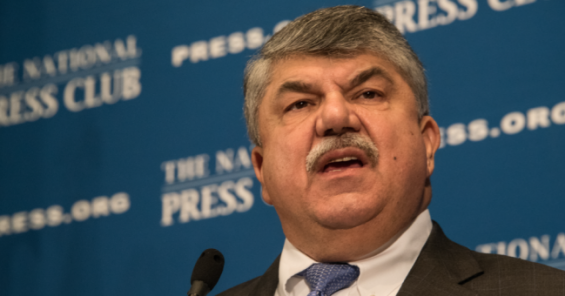 Brother Richard Trumka, president of the AFL-CIO for the past 12 years, died at the age of 72 last week. UNI Global Union expresses its deepest condolences to his family and loved ones as well as to the workers and unions the world over who have lost his leadership, friendship and vision.

Born the son of a coal miner in southwestern Pennsylvania, his lifelong commitment to working people began with the United Mineworkers of America. Trumka became that union’s youngest president in 1982.

In this position, he led two historic strikes: first, the 1989 strike against Pittston Coal, which helped spark a resurgence of the U.S. labour movement. The UMWA famously refused to give in—despite the fact that state courts levied millions of dollars in fines against the union for road blockages and other strike related activity, which were ultimately reversed by the U.S. Supreme Court.

Later, he headed a successful 7-month national coal strike to secure the rights of union members to employment in non-union mines, a ground-breaking approach towards building unions across the industry.

Both campaigns relied on bold strategies to build workers’ power, and this willingness to innovate continued at the AFL-CIO.

Brother Trumka knew that shifting power from the corporate elite to working people would require a broad coalition. He famously addressed white union members’ reluctance to vote for President Barack Obama, and he bluntly addressed labour’s responsibility to combat racism saying, “because we know, better than anyone else, how racism is used to divide working people.”

More recently, Trumka has been a tireless campaigner to change the political landscape. Understanding the historic opportunity to make gains under the Biden administration, Trumka’s top priority was to win the labour law reform, known as the PRO Act. The law is critical to reversing the long-term decline in union membership in the United States.  While union approval is at a 50-year high and most workers would join a union if afforded the chance, only 11 per cent of U.S. workers are union members, and collective bargaining covers roughly 6 per cent of workers in the private sector. The PRO Act would change the rules of the game by limiting employers’ ability to bust unions.

Trumka carried his belief of uniting workers to the global arena. His voice—at the OECD Trade Union Advisory Committee, at the World Economic Forum, and beyond—was a consistent, powerful force calling for a fairer global economic system. His solidarity with workers extended far past the U.S. border, for example recently calling on the Biden Administration to step-up human rights protection in Colombia.

“When I was a young lawyer, I worked under the leadership of President Trumka while he was at the helm of the Mineworkers. He was inspiring and smart, not afraid of taking big risks to win big for working people. Always true to his values, he never forgot his roots in coal country, and he carried his fire and passion for justice and dignity for workers onto a national and then global stage.

“I’m lucky to have known him. We are all lucky to have had him as a leader in our global movement. In his honour, we must all double down in our efforts to ensure that all workers have an opportunity to join a union and bargain for better lives.”