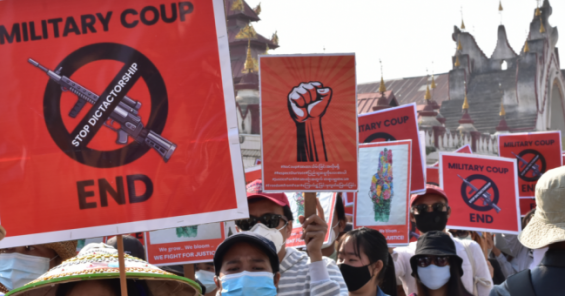 UNI Global Union has pledged to do everything possible to support the fight for rights and democracy in Myanmar. In a statement from UNI’s Management Committee, which met this week, UNI strongly condemns the military coup and calls on affiliates worldwide to support demands for an end to the bloodshed and denial of fundamental freedoms in Myanmar.

Statement of the UNI Global Union Management Committee on Myanmar

UNI Global Union condemns the military coup in Myanmar in the strongest possible terms. We are outraged by the unlawful detention of National League for Democracy (NLD) elected leaders, including State Counsellor Aung San Suu Kyi and President U Win Myint, ministers, officials and activists. This coup represents a perversion of Myanmar’s democracy and an attack on the people’s will, as reflected in last November’s election result.

UNI deplores the declaration of a state of emergency and the adoption of laws that allow the military to tighten their illegitimate grip on power. We further note that the army has resorted to martial law, banning all public gatherings denying freedom of association and freedom of expression to the working people of Myanmar in an attempt to maintain its precarious grip on power by force.

UNI rejects the charges against the Confederation of Trade Unions Myanmar (CTUM) and Myanmar Industries Craft and Service – Trade Union Federation (MICS) elected leaders and officials. We deem unacceptable that 16-labour organisations have been declared illegal by the military and that trade union leaders have been forced into hiding. Trade unions are a pillar of democracy in Myanmar and throughout the world, therefore it is clear that these tactics are designed to further dismantle Myanmar’s democracy.

UNI holds the Myanmar military responsible for the more than 850 deaths that have been caused by the ruthless attempt to suppress the peaceful, country-wide Civil Disobedience Movement (CDM). We condemn the unrestrained use of violence and lethal weapons by the Myanmar military and the resulting bloodshed. We call for the immediate cessation of the violence to stop this senseless loss of life.

UNI calls upon all people of good conscience to join us in our condemnation of the Myanmar military and to do all in their power to force the military to hand the country back to the people of Myanmar and their democratically elected leaders.

UNI stands in solidarity with our sisters and brothers of the Myanmar Trade Union movement. We pledge to do everything possible to support the fight for rights and democracy in Myanmar.

In addition, and in line with the demands of the Council of Global Unions, UNI

We call on our affiliated unions worldwide to support the measures outlined above and to:

In addition, UNI notes that the military has increasingly curtailed access to the internet and communications tools in use by the protestors.  We call upon telecommunications companies operating in Myanmar to protect human rights and to:

​UNI ICTS’s leadership body has previously called for telecoms companies to resist the government’s directives to spy on pro-democracy and human rights activists. As part of the Council of Global Unions, UNI has repeatedly condemned the illegal coup.