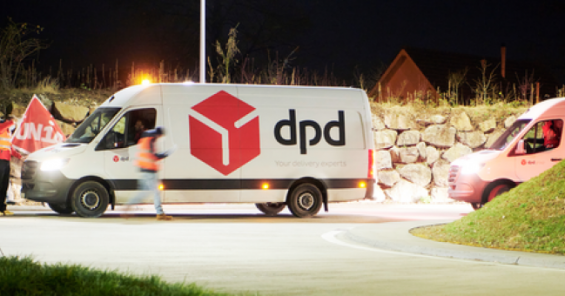 The company should stop stalling and start negotiating, says UNI

“Excessive hours, unpaid work, enormous stress”—these are just some of the reasons UNI Global Union affiliate Unia gives for why DPD drivers in Switzerland are organizing for better jobs. Unfortunately, the company, the second-largest parcel delivery service in Europe, has refused to negotiate with the union.

Instead, Unia says DPD is creating an atmosphere of “repression” in its warehouses—evening filing a legal challenge that threatens to undermine workers’ right to join their chosen union as well as decades of Swiss labour protections. One driver told Unia that management in the Zurich head office has intimated that workers would be fired for speaking with the Swiss union.

Even though drivers like this one, have been organizing openly since January 2021, their problems persist.

“We are talking about hours upon hours of unpaid work and a series of other abuses chilling workers’ rights. But rather than fixing the problems, the company is more concerned with is to fighting our union, and investing big money into expensive Zurich law firms,”says Roman Künzler, head of logistics at Unia.

In this context, UNI Global Union has offered to mediate these issues under the auspices of the International Labour Organization and through the processes within its global agreement with GeoPost/La Poste, DPD’s parent organization, owned by the French state.

Global agreements set standards for workers’ rights and other employment issues throughout companies’ global operations. The agreement with GeoPost states that “GeoPost will not present obstacles to union recognition or representation” and “no employee will risk being intimidated, harassed or retaliated against for exercising these rights.”

UNI Global Union’s General Secretary Christy Hoffman said, “The language in our agreement with GeoPost is clear, is fair and it applies to DPD. As a global union, we must make sure that the provisions laid out in our agreements are fully implemented and that violations are swiftly resolved. Unfortunately, DPD management in Switzerland has built roadblocks to a satisfactory resolution—a resolution that upholds workers’ right to the freedom of association and to collective bargaining.

“DPD drivers in Switzerland deserve decent work, with reasonable hours, a liveable wage, and safe conditions. They deserve a collective agreement, negotiated with the unions of their choice. They deserve respect and dignity. We will stand with them until they win these things—that will require DPD to stop delaying and start good faith negotiations.”