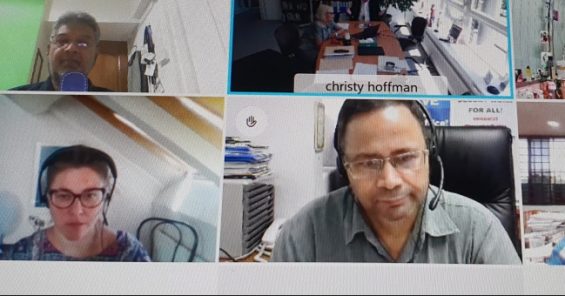 National Union of Bank Employees (NUBE) Malaysia has a complaint to the UK National Contact Point for the OECD Guidelines for Multinational Enterprises about HSBC’s arbitrary violation of the ONE HSBC agreement entered with the union. Unilaterally the bank implemented a Voluntary Separation Scheme [VSS] and retrenched over 200 employees in 2015 and 2017.

HSBC is now getting ready to retrench additional staff in the pretext of the COVID-19 pandemic. The complaint also highlights the union-busting actions of the bank violating the provision in the collective agreement article 17 (2) not holding and disciplinary inquiry before terminating the two trade union leaders for having taken part in a legitimate trade union action organized by NUBE.

UNI global union joined with NUBE to support the UK National Contact point and assured its solidarity, and General Secretary Sis Christy Hoffman wrote to UK NCP on 31 May 2021. [Ref. Related Files link below for the text of the letter]

Sister Christy Hoffman held a video conference with NUBE General Secretary J Solomon and Asst General Secretary A Karuna on 14 June 2021 to expedite the complaint processing with the backing of the UNI Global Union and Trade Union Advisory Committee to the OECD.