UNI to march in solidarity with CGIL after far-right attack 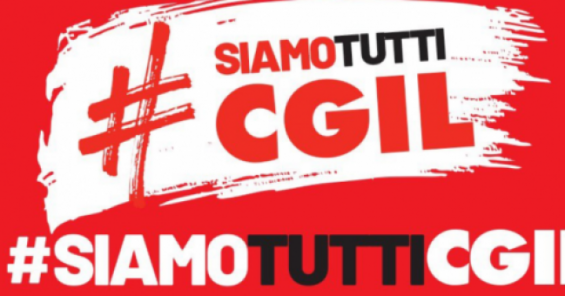 Trade unionists from across Europe and the world, including representatives from UNI Global Union, will descend on the streets of Rome Saturday, 16 October, to condemn the far-right attack on the Italian General Confederation of Labour (CGIL) headquarters and to send a message that the global labour movement will not be silenced.

“UNI Global Union is standing shoulder to shoulder with our CGIL brothers and sisters to reject this fascist act of terror and to defend democracy,” said Christy Hoffman, General Secretary of UNI Global Union. “An injury to one is an injury to all is a central tenet of our movement, and we are responding to this assault with a reinvigorated sense of unity, of solidarity and commitment to trade union values.”

Last week, following an anti-vaxxer rally in Rome, members of far-right party Forza Nuova joined the unauthorized protest and marched to the union’s offices, breaking windows and pushing their way into the union’s building. Once inside, they caused further damage, including smashing computers.

“Whenever fascism raises its head, trade unions are one of the first targets, because the collective of workers are guarantors of democracy, freedom and justice. History will not repeat itself. 2021 is not 1922. We will not be intimidated. This attack only strengthens our determination to push back united and fight the enemies of democracy – in Italy, Europe and worldwide; at the workplace, in politics and in elections.”

Across the Atlantic, UNI Americas’ executive committee also issued a statement in supporting CGIL, and union activists the world over spoke out against the raid.

Prime Minister Mario Draghi denounced the incident as well: “Trade unions are a fundamental defence of democracy and workers’ rights. Any intimidation against them is unacceptable and must be rejected with absolute firmness.”

UNI representatives will also March 15 October in Geneva in support of CGIL.