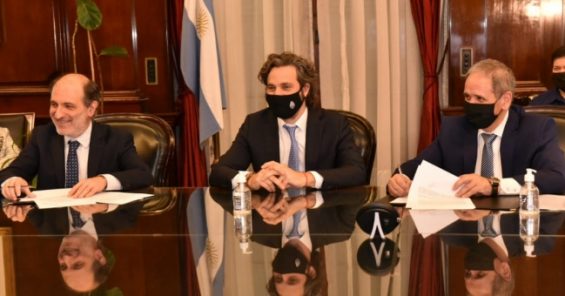 The agreement stipulates that the quota “may not be less than 1% of the total staff of the Banco de la Nación” and its purpose is to implement specific measures aimed at repairing the exclusion and structural discrimination suffered by this social group in the past.

In a joint statement, both organizations declared that they seek to “contribute to the construction of a better and fairer society for all citizens, seeking to favour the inclusion of neglected sectors and committed to recognizing and repairing the historical social debt with this group.”

“It is the first bank in the world to sign an agreement of this kind. I have to add that this would not be possible if it were not supported by a policy of inclusion by the national Government. The agreement has a very high ideological content – it is not limited to the quota, it talks of a campaign of awareness and sensitization, and training professionals – this seems to me like the right path.”

Guillermo Maffeo, Regional Director of UNI Americas Finance, said the ground-breaking agreement marks a before and after in the organized labour movement:

“The trans position that La Bancaria has achieved in Argentina’s main bank is a giant step in the just recognition of dignity and integration for the most vulnerable group in our societies.”

“This agreement transcends Banco Nación and creates a precedent for other banks in Argentina. It also cuts through borders and forces us to fight for the trans quota in all banks in the Americas and globally. UNI Americas Finance did a survey across continents and found it is the first time in the world that a bank has set a quota for trans and transvestite people. This is a great source of pride and a huge challenge to expand it everywhere. In that sense, I want to recognize the work done by the Internal Trade Union Commission of the Banco de la Nación in Argentina did along this path, without them the story would have been different.”

“At UNI Equal Opportunities, we have been campaigning to raise awareness and protect all discriminated groups, including LGBTI + workers worldwide. Unions have an essential role in promoting decent work, free from any form of discrimination. Banking is a clear example of how unions can act in defence of labour rights, dignity and the integration of trans groups in a work environment free from violence and discrimination.”