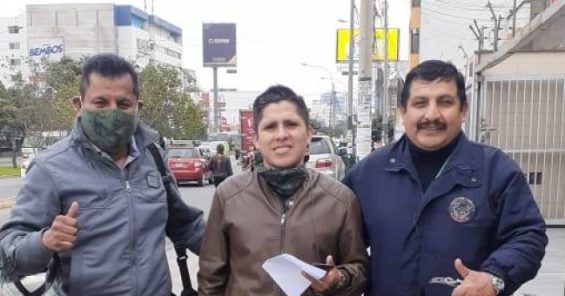 A new court decision has reinstated four members of the Prosegur Union in Peru (SPP in Spanish) who were fired by Prosegur two years ago, when they stopped their activities in response to labor problems, disproportionate sanctions for union members, and refusal of the general manager of Prosegur at that time, García Proaño, to engage in dialogue, rejecting the union’s request. After this, Prosegur didn’t renewal the labour contracts of 43 workers.

The union, which employees at this Spanish private security multinational, sees the decision as a victory and continues efforts to reinstate other workers who were terminated and await court decisions. The company had granted paid leave to all these workers – a frequently applied measure to avoid accepting legal defeats.

Altamirano, who has worked for Prosegur for 31 years, added: “We are very happy about these victories. Thanks to our legal advisor on labour issues, we have workers who have won their final judgment and are returning to work with job stability, since they will now have permanent contracts. We hope that time will prove us right with our brothers who have yet to be reinstated.”

Despite this reinstatement, employees Noé Gamarra López, Cristian Yampol Trucios Chuquispuma, Guido Ventura Munive and Waalter Reynato Cotarma Soto have not been able to return to their jobs because their firearms licenses have expired. The company sent notarized letters in July stating that they are on unpaid leave for three months (July, August and September) because they do not have a firearms license. Ernesto Altamirano, General Secretary of the SPP, said: “The licenses expired before the pandemic broke out, and it is the company’s responsibility to manage permits but did not do so in due time. Most of the licenses expired in November, December and January, and the procedures to request the permits are always carried out one or two months before their expiration, but the company did nothing… This violates the fundamental rights of workers because it acts against the good faith of the company and its employees”.

Once again, the Court rules in favour of the union, even though this could have been solved in dialogue if the company was open to it. UNI Americas celebrates this decision and will continue to support the work of the SPP to defend of the rights of workers at Prosegur.