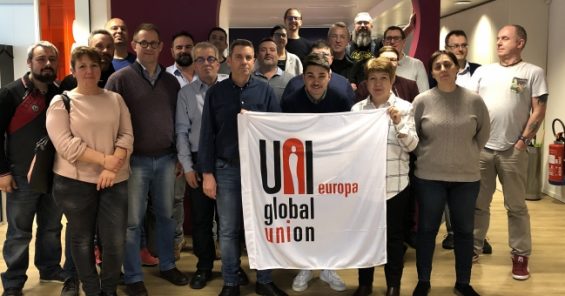 Graphical and packaging unions in Europe are mobilising in the face of Circle Media Group’s (CMG) irresponsible activities which have already seen its Belgian printing works at Charleroi put into liquidation with the loss of 180 jobs. CMG operates in 9 European countries (France, Belgium, UK, Germany, Austria, Spain, Finland, The Netherlands and Hungary)  with more than 5000 workers.

The unions concerned came together in Brussels recently  at a meeting organised by UNI Europa Graphical and Packaging.

Unions are discussing how to combat a litany of grievances, including job cuts, late payment of wages, unpaid suppliers and bank delisting.

UNI Europa Graphical and Packaging affiliates have already filed complaints at the European and national level with the relevant public authorities over CMG’s opaque financial practices which risk workers’ jobs.

Nicola Konstantinou, the head of UNI Graphical and Packaging said, “We are deeply concerned at the cavalier attitude of CMG to both its business model and its workforce. We fear that if CMG is not made to act responsibly, the closure of the print works at Charleroi will not be the last. CMG’s more than 5000 workers and their families deserve better than this. Our unions are ready to mobilise.”

Circle Media Group is the name given to the company after the merger between Circle Printers and Roto Smeets which took place in 2017. In 2018, Circle Media Group conducted several acquisitions such as Corelio Printing, CPI group and Kőrner Druck.