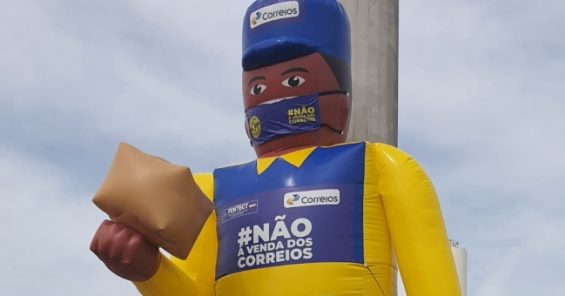 This week, Brazilian postal workers mobilized to defend the Brazilian Post Office (Correios, Empresa Brasileira de Correios e Telégrafos) against the government’s persistent push to privatize. Handing the Brazilian post over to international private capital would end one of the largest public assets in the country and such a move would be unconstitutional, the unions say.

And they have support. Augusto Aras, Attorney General of the Republic, stated that the sale of 100 per cent of Correios is unconstitutional.

FENTECT and FINDECT have been pushing to stop the privatization which would be a step backwards for workers and for the country. The unions’ efforts are supported by the Brazilian Constitution, which enshrines, protects and guarantees the right to a public postal service.

“Correios must continue to be a public service that serve the entire Brazilian population. To hand over this integral public service, which has served the Brazilian people for hundreds of years, is to break the Constitution for the benefit of a wealthy few,” stated the trade unions.

Correios employs around 100,000 workers throughout Brazil, with 15 thousand units between agencies, distribution centres, treatment and logistics. Privatization would cause great damage to the Brazilian people, and further exacerbate the severe economic and social crisis the country is already going through.

In 2020, Correios had a profit estimated at R$1.5 billion, and between 2017 and 2019 there were more than R$930 million in profits, proving that Correios is both profitable and essential for the Brazilian people.

“Not only is it an economic mistake to privatize, but also a social one – the postal service has been fundamental in the fight against Covid-19, bringing resources and aid to all regions,” highlighted Briceida González, Regional Director of UNI Americas Post&Logistics, emphasizing the brave work of postal workers on the frontline throughout a global pandemic, even without proper protection.

“An institution with more than 300 years of service to Brazilians, which supports small businesses, employs thousands of workers, and generates millions in profits is a shining example of a public service that works. To sell this asset is to lose national sovereignty,” said Marcio Monzane, Regional Secretary of UNI Americas. “UNI and all its affiliates around the world will continue to support our colleagues in defence of a public and universal postal service.”

The unions have also received public support from federal deputies.

FENTECT and FINDECT are planning a day of action next Monday, July 12, against privatization, and in defence of rights and jobs. We call on all UNI affiliates to join this day by taking a picture with the poster and using the hashtag #nãoàvendadosCorreio